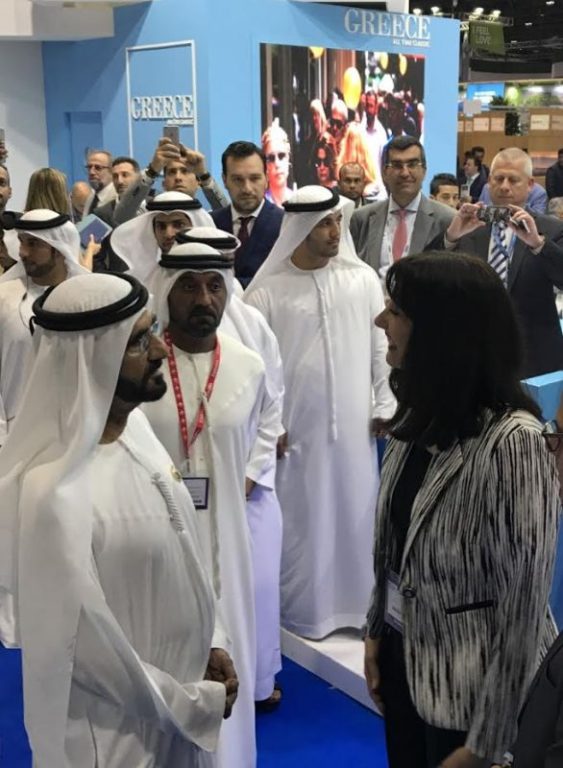 Sheikh Mohammed bin Rashid Al Maktoum, Vice-President and Prime Minister of UAE and Ruler of Dubai, speaking with Greek Tourism Minister Elena Kountoura at the GNTO stand at the ATM 2017.

Tourism Minister Elena Kountoura held a series of meetings with key figures of the United Arab Emirates, aiming to strengthen tourism relations and attract more arrivals to Greece, during this year’s Arabian Travel Market (ATM) held in Dubai. The minister’s visit to the UAE follows the ministry’s strategic opening to the Arab market since 2015.

The 24th edition of the ATM opened at the Dubai World Trade Centre on April 24 with over 2,600 confirmed exhibitors representing more than 150 countries. ATM is the leading, international travel and tourism event in the Middle East for inbound and outbound tourism professionals.

Greece was present at this year’s ATM through the stand of the Greek National Tourism Organization (GNTO), which was visited by Sheikh Mohammed bin Rashid Al Maktoum, Vice-President and Prime Minister of UAE and Ruler of Dubai, during his tour of the exhibition. In a conversation he held with Minister Kountoura he praised Greece as a tourism destination.

The Greek tourism minister also met with Emirates Group Chairman and Chief Executive Officer, Sheikh Ahmed bin Saeed Al Maktoum, with whom she discussed the satisfactory results of the recently launched direct daily flight that connects Athens to Dubai and New York throughout the year. They also discussed future partnerships in the context of opening towards the markets of China and India. 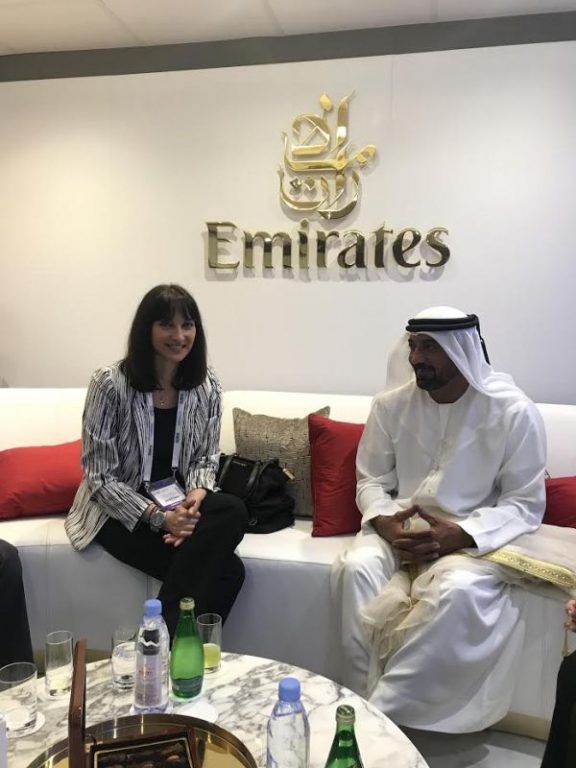 During her visit to the Dubai Chamber of Commerce the minister informed its president, Hamad Buamin, on the possibilities and opportunities for investment in the Greek tourism sector. She also met with Habtoor Group Vice-President and CEO, Khalaf Al Habtoor, as well with the Director General of the Abu Dhabi Tourism and Culture Authority, Saif Saeed Ghobash.

Moreover, a special event was held at the GNTO stand in ATM to promote Greek tourism and was attended by UAE tourism and travel professionals.

Minister Kountoura also gave a series of interviews to the UAE press including Gulf News, Khaleej Times, The National, Al Bayan, Al Ittihad, and appeared on the Dubai TV network where she gave an interview in which she referred to the dynamic development of the tourist arrivals from the UAE to Greece in 2016 and the high demand from the market recorded for 2017.

The ATM exhibition will wrap up on April 27.