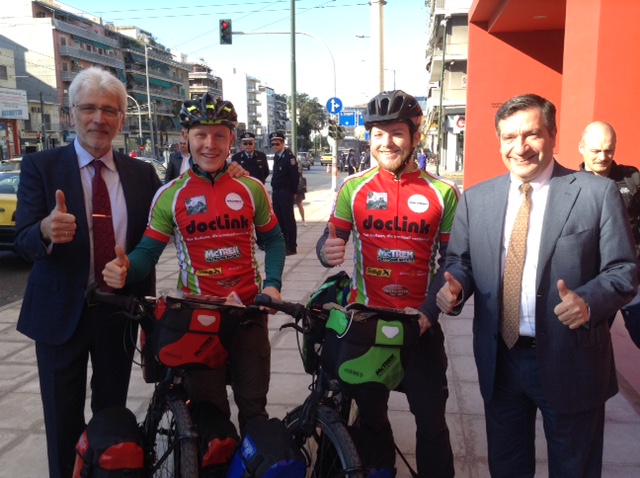 Two cyclists will for 100 days ride their bikes some 4,000km across 14 European countries starting from Athens, in order to convey the message of art and solidarity to their final destination: the German city of Kassel, where on June 10 the second part of the documenta 14 show kicks off.

The two 20-year-old riders, Vincent Keller and Leon Gross, began their trip in Athens during the opening of documenta 14 on Saturday with the aim to show the world that “Art Unites People”.

From Greece, the cyclists will travel through Albania, FYROM, Kosovo, Montenegro, Bosnia-Herzegovina, Serbia, Croatia, Slovenia, Hungary, Slovakia, Austria and the Czech Republic with their message of unity and tolerance, which will be boosted through The Diary of a Young Girl (Anne Frank), which residents across cities on their itinerary will be asked to sign with their own message of solidarity and understanding.

The Diary of Anne Frank will then take its rightful place among more than 100,000 books in Kassel’s “Parthenon of Banned Books”, a monument to intellectual freedom by artist Marta Minujin.

The ”documenta 14: Learning from Athens” show opened over the weekend at Athens’ National Museum of Contemporary Art inaugurated by Greek President Prokopis Pavlopoulos and his German counterpart Frank-Walter Steinmeier.

”Even though ‘Learning from Athens’ appears to be self-evident since it is the cradle of our democracy, it aims to focus more on the present, on the political and economic rifts between us, which, as I understand the message, we must overcome,’’ Steinmeier said.

Documenta 14, directed by Adam Szymczyk, runs through to July 12 at various venues across the Greek capital. After Athens, the show will open in Kassel on June 10 and run through to September 17.

To see the whole program of events, press here.

AEGEAN on TripAdvisor’s 2017 Best List for Airlines in Europe