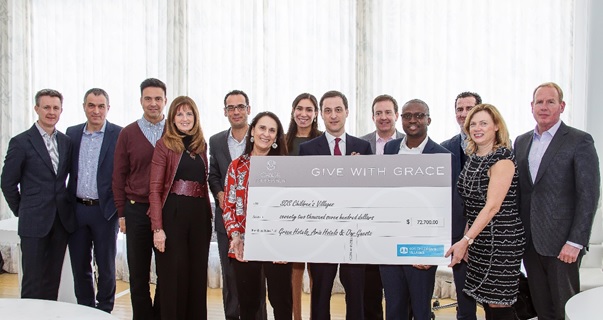 The Grace Foundation, through its “Give with Grace” initiative, recently made a second donation under its partnership with SOS Children’s Villages, bringing the total sum donated to the charity to $129,100. A total of $72,700 was raised throughout 2016.

“It is with great pleasure that we offer this donation to SOS Children’s Villages, on behalf of our guests and partners who have contributed generously throughout the last year,” said Robert Swade, Chief Executive Officer of Grace Hotels, during a special presentation took place at The Mayflower Grace in Washington, Connecticut.

The presentation was attended by Lynn Croneberger, Chief Executive Officer of SOS Children’s Villages USA, and the senior leadership team of Grace Hotels, including General Managers from each of its hotels around the world.

“We are tremendously thankful to Grace Hotels, Aria Hotels and their guests for this generous gift and their ongoing commitment to supporting vulnerable children around the world,” Lynn Croneberger said.

The “Give with Grace” program was set up in 2015 by Grace Hotels and its sister group Aria Hotels as part of the charitable activities of the Grace Foundation. Hotels donate $1 for every night a room is occupied and invite guests to do the same for each night they stay. Money is also raised through the sale of certain dishes on the menus and hand-crafted sterling silver bracelets featuring the “Give with Grace” emblem.

The funds will be distributed to SOS Children’s Villages around the world, with the principal aim of giving vulnerable children the opportunity to grow up in a loving home. The international, non-governmental organisation works to strengthen families and prevent family breakdown, and works with communities and states to provide a loving and supportive family for each child who does not have one.

The Grace Foundation also raises further sums each year through the donation of hotel room nights for numerous charities and worthy causes. In 2016 it announced its support for Greek charity ELEPAP – Rehabilitation for the Disabled, which supports the development of children with physical disabilities and developmental difficulties. The foundation has always had close ties with Greece and is keen to support the country amid its sustained economic and social crisis.