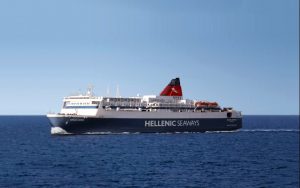 Greek ferry operator Hellenic Seaways announced on Thursday, the launch today of ferry services from the port of Piraeus to Paros, Naxos and Santorini with the ‘Nissos Samos’.

HSW said it was boosting its presence in the Cyclades with its largest ferry, the 2,210 passenger ‘Nissos Samos’, which departs four times a week at 4.30pm from Gate Ε3 at Piraeus. The service will run daily as of June 16.

‘’We’ve invested millions of euros in the ‘Nissos Samos’… with the aim to upgrade services offered on Aegean itineraries,’’ said Hellenic Seaways CEO Antonios Agapitos, adding that ”Friday’s night route will offer passengers the chance to be in Santorini on Saturday morning’’.

Agapitos said told the press on Thursday that he expects ferry passenger traffic to pick up slightly primarily due to foreign tourists.

A 40.4 percent stake in HSW has been up for sale after Piraeus Bank launched an open international tender for the company.

Meanwhile, Minoan, which controls 48.5 percent of HSW, has been excluded from the board, and has called an extraordinary general meeting of HSW shareholders for April 20.