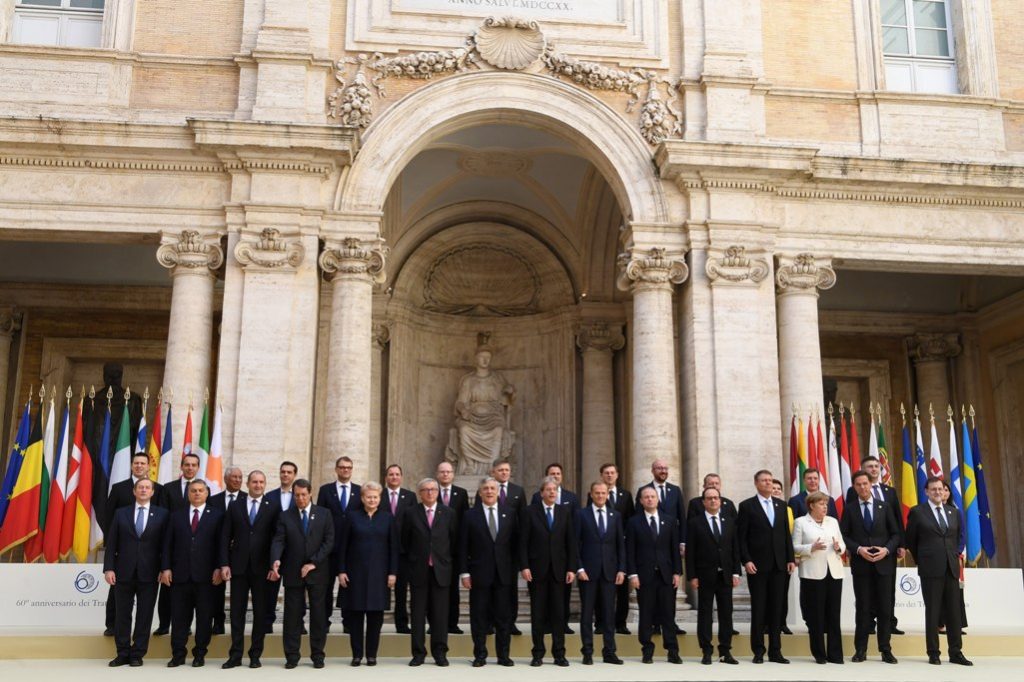 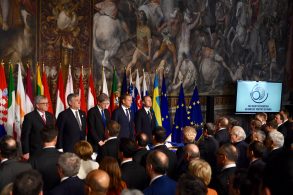 Celebrating the 60th anniversary of their founding treaty on Saturday, March 25, European Union leaders signed the Rome Declaration, which proclaimed “Europe is our common future.” The signing took place during a ceremony in a hall in Rome where the Treaty of Rome that founded the EU was signed on March 25, 1957, by six countries.

Prior to the signing, the President of the European Council Donald Tusk invited the 27 EU leaders to prove that they are the leaders of Europe.

“Europe as a political entity will either be united, or will not be at all,” he concluded.

Prime Minister Theresa May was absent from the ceremony as Britain is to begin a two-year timetable to leave the union. 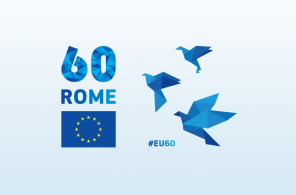 Press reports underline that the EU’s big challenge is the quest for unity, as it is losing its first member following the referendum on the Brexit and Euroscepticism and populism are gaining ground in the wake of austerity to tackle the economic crisis.

Hosting the gathering, Italian Prime Minister Paolo Gentiloni acknowledged the EU’s “problems” but underlined “we stand together and we move forward”.

The Rome Declaration features the EU’s past achievements, presents challenges and pledges to work for unity at 27 and strengthen common action in key policy areas, to the benefit of citizens.

“We, the Leaders of 27 Member States and of EU institutions, take pride in the achievements of the European Union: the construction of European unity is a bold, far-sighted endeavour. Sixty years ago, recovering from the tragedy of two world wars, we decided to bond together and rebuild our continent from its ashes. We have built a unique Union with common institutions and strong values, a community of peace, freedom, democracy, human rights and the rule of law, a major economic power with unparalleled levels of social protection and welfare.

European unity started as the dream of a few, it became the hope of the many. Then Europe became one again. Today, we are united and stronger: hundreds of millions of people across Europe benefit from living in an enlarged Union that has overcome the old divides.

The European Union is facing unprecedented challenges, both global and domestic: regional conflicts, terrorism, growing migratory pressures, protectionism and social and economic inequalities. Together, we are determined to address the challenges of a rapidly changing world and to offer to our citizens both security and new opportunities.

We will make the European Union stronger and more resilient, through even greater unity and solidarity amongst us and the respect of common rules. Unity is both a necessity and our free choice. Taken individually, we would be side-lined by global dynamics. Standing together is our best chance to influence them, and to defend our common interests and values. We will act together, at different paces and intensity where necessary, while moving in the same direction, as we have done in the past, in line with the Treaties and keeping the door open to those who want to join later. Our Union is undivided and indivisible.

In the ten years to come we want a Union that is safe and secure, prosperous, competitive, sustainable and socially responsible, and with the will and capacity of playing a key role in the world and of shaping globalisation. We want a Union where citizens have new opportunities for cultural and social development and economic growth. We want a Union which remains open to those European countries that respect our values and are committed to promoting them.

In these times of change, and aware of the concerns of our citizens, we commit to the Rome Agenda, and pledge to work towards:

We will pursue these objectives, firm in the belief that Europe’s future lies in our own hands and that the European Union is the best instrument to achieve our objectives. We pledge to listen and respond to the concerns expressed by our citizens and will engage with our national parliaments. We will work together at the level that makes a real difference, be it the European Union, national, regional, or local, and in a spirit of trust and loyal cooperation, both among Members States and between them and the EU institutions, in line with the principle of subsidiarity. We will allow for the necessary room for manoeuvre at the various levels to strengthen Europe’s innovation and growth potential. We want the Union to be big on big issues and small on small ones. We will promote a democratic, effective and transparent decision-making process and better delivery.

We as Leaders, working together within the European Council and among our institutions, will ensure that today’s agenda is implemented, so as to become tomorrow’s reality. We have united for the better. Europe is our common future.”

The Commission will also be organising in the months ahead public debates with the European Parliament and Member States, as well as online consultations, so that Europe’s citizens have their say and are able to share their views on the future of Europe via the Commission Representations and a dedicated website, which will be launched on 25 March.

Greece to Receive €1.3b from EU for Infrastructure Projects