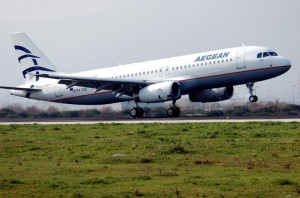 Aegean reported turnover of over one billion euros in 2016, a first for the Greek carrier, but saw a decline in its net earnings after tax due to weak demand in the second quarter of the year.

“In 2016 we operated a fleet of 61 aircraft, continuing our network expansion and reaching 145 total destinations out of our main hub in Athens and the Greek regional airports,” said Dimitris Gerogiannis, managing director of Aegean, adding that the airline offered more than 16 million seats and operated more than 112 thousand flights, surpassing one billion euros in revenue for the first time, thus reaching historical high records for a Greek airline.

“Weak demand in the second quarter of the year combined with domestic tax increases in Value Added Tax on airline fares by 11 percentage points, had a negative impact on full year results, despite strong performance in the third and seasonally most important quarter of the year. Given targeted network adjustments in the last quarter, load factors improved significantly, especially on international routes and also continue the positive trend since the start of 2017,” Gerogiannis said.

According to Aegean’s managing director, undoubtedly high seasonality and the strong reliance on incoming tourist traffic will lead to weak results during winter months for as long as local demand remains weak.

“In 2017 we will continue to adjust our network and focus on our Athens hub,” he said, adding that preliminary indications for the summer season are positive with a rising prebookings trend compared to last year.