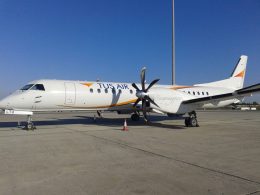 Cyprus-based TUS Airways has launched a new direct flight from Athens to Haifa, a route that has been launched for the first time ever and is part of the airline’s “The Ultimate Schedule”.

The new route between Athens and Haifa will operate twice per week, on Thursdays and Sundays, departing at 12:15pm. With tickets for one way flights from just 79 euros for one way, the fascinating city of Haifa, the “entry gate” to northern Israel, is closer than ever.  At Haifa, travellers will come across the city’s fascinating history and culture and will have the chance to visit the holy places in Acre, Nazareth, Tiberias and Sea of Galilee that are close by and can be explored through a day tour.

Tickets from Athens to Haifa are already available for booking through the company’s website or via travel agent. In-flight services include a complimentary soft drink and hand baggage up to 8kg.

TUS Airways’ “Τhe Ultimate Schedule” is the philosophy of the company, which aims to connect Cyprus with neighboring countries in the Eastern Mediterranean via daily frequent flights, offering comfort and convenience, as well as competitive pricing. TUS has flown over 34,000 passengers since the commencement of its operation in mid-April 2016.

TUS Airways has its main base at Larnaca International Airport and plans to operate flights to 16 various destinations in the first stage, including countries such as Greece, Israel, Jordan, Egypt and Lebanon. The company’s goal is to offer 2-3 daily flights, on average, to each destination.