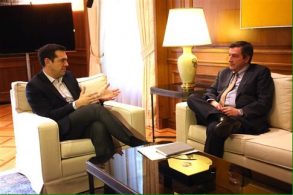 Five key areas in Athens are set to undergo major transformation works under a PPP-funded five-point plan aiming to make the Greek capital sustainable and safe, a leading tourist destination, and to create new jobs.

The plans were discussed on Thursday, at a meeting initiated by Prime Minister Alexis Tsipras, including Athens Mayor Giorgos Kaminis and Attica Prefect Rena Dourou, among others.

“My aim is to exchange thoughts on a shared vision,” said Tsipras, adding that the city must obtain a metropolitan character which will contribute to the improved quality of life for its residents and visitors.

The five priority projects, to be funded by private and public entities as well as with EU support, are the Goudi Metropolitan Park linking the municipalities of Athens, Papagou and Zografou; revamping Athens historic center from Syntagma Square to Keramikos to include the use of abandoned buildings as well as highlighting archaeological sites and bringing back residents to the city center; redeveloping the Kountouriotika neighborhood after demolishing the Panathinaikos Stadium and building a park in its place aiming to unify the areas of Lycabettus and Ambelokipi; the upgrade of the Votanikos – Eleonas area with the creation of athletic, recreational and cultural centers; and the construction of a new Panathinaikos Stadium near the Katehaki metro station to be connected via metro from Galatsi.

The prime minister added that changes will contribute to making Athens an even more attractive tourist destination.

“The prime minister’s initiative to invite me to discuss the major issues affecting Athens and its citizens is an important and very positive step. It is significant that there is a desire to support the work we are doing for the restoration of Athens, which requires the cooperation of local and national governments,” said Kaminis.