The Athens – Attica & Argosaronic Hotel Association on Thursday said that the 2016 tourism season for hotels in the Greek capital was “marginally positive”. 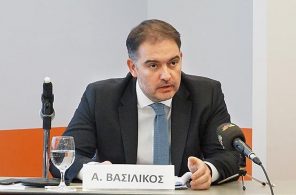 “2016 was not a record year for hotels in Athens, despite the rise in visitor arrivals,” the association’s president, Alexandros Vassilikos, said during a press conference.

According to data compiled by GBR Consulting, the average occupancy rate for hotels in Athens in 2016 did not exceed 1.7 percent in relation to 2015, reaching 76.2 percent (against 74.9 percent in 2015). Meanwhile, the performance of hotels in the Greek capital took a tumble during the February – June five-month period compared to 2015, seeing a drop of up to a 6.5 percent drop in May.

Referring to the prospects of 2017, Vassilikos estimated that the year has made a positive start, considering the additional air connections to Athens. However, he added that the city’s image — as well as what happens in the surrounding area — will determine the tourism course of 2017.

Vassilikos said that forecasting was not possible “since it is still too early” since “Athens has become a last minute destination”.

Short-term rentals are mushrooming in Athens 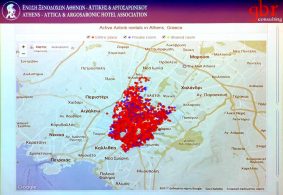 The map shows the active Airbnb rentals currently in Athens.

The association’s president also made reference to the large gap between visitor arrivals recorded at Athens International Airport and hotel stays. “This leads us to the conclusion that visitors are staying in other types of accommodation”, he said adding that private residences being leased for the short-term are mushrooming “out of control” all over the city.

“What we have is a massive exploitation of properties that is turning into a business,” he said and underlined the necessity for the law containing short-term rental rules to finally come into effect so such properties are taxed accordingly.

“These properties should be registered and taxed, especially when the traditional hotels nowadays are overtaxed.”

On a more positive note, Vassilikos said that — despite the numerous tax and financial burdens imposed on the hospitality industry — several new hotels have opened, closed down units have reopened and several others have been renovated.

Moreover, the association’s president said that a structured strategy is needed for destination Athens in order for major investments to take place.

“Athens has attracted increased investor interest and this is not the first time. Fifteen years ago, before the Olympic Games, there was great interest for investment… But after the Games absolutely no strategy was followed for the development of the city… It is absolutely necessary to have a total of destination development strategy,” he said.

“We still have a long way to go before we can compare ourselves with major destinations abroad,” he said.