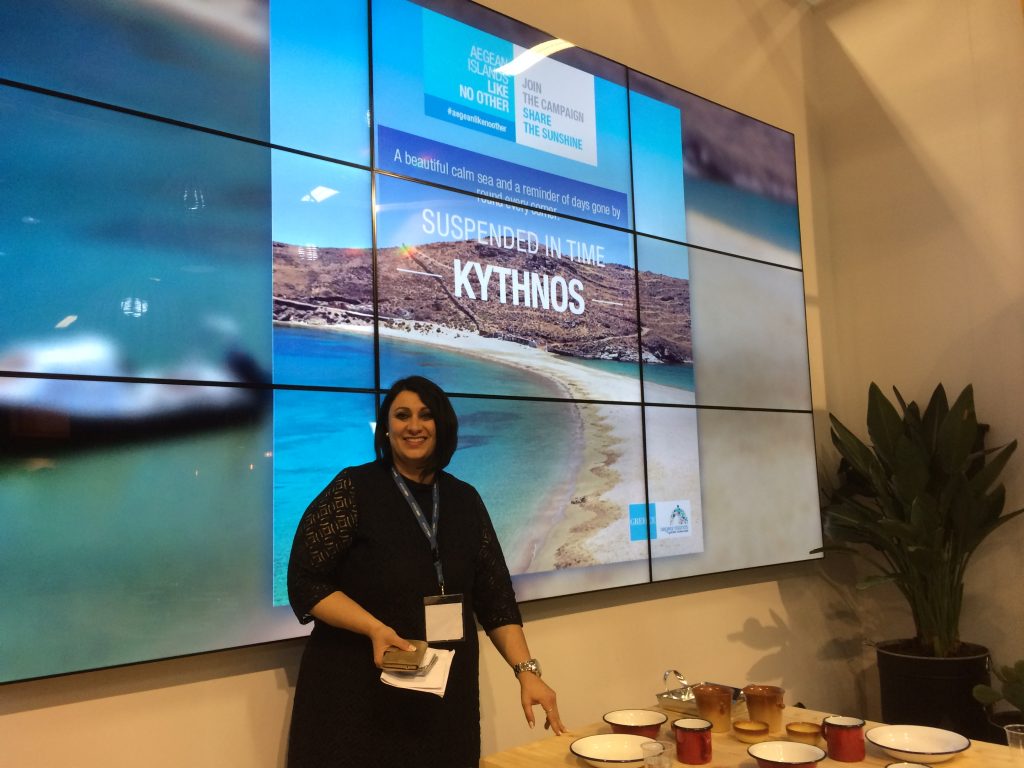 Head of the Ios Tourism Board, Angela Fakou, in front of the Aegean Islands stand at ITB Berlin 2017.

By Maria Paravantes in Berlin

”New generations, new mentalities will take Greek tourism to the next level,” Angela Fakou, head of the Ios Tourism Board told the Greek Travel Pages (GTP) during the ITB Berlin on Wednesday.

”The future of Greek tourism is now in the hands of a well-trained and educated younger generation that has the skills and the knowhow to make the vision of Greece as a leading world destination a reality,” Fakos said on the opening day of the ITB Berlin 2017.

‘’We have managed with the lowest cost to offer the finest quality product,’’ she said, adding that due to the crisis tourism professionals ‘’have little room for financial gain’’ and can only seek to ensure quality while working for a vision of Greece that will ‘’pay off’’ in the future.

‘’We must extend the tourism season and open our islands in April. In the beginning we will have to sacrifice money and energy but once this reality is established we will begin to see the benefits and financial rewards,” Fakou, who also owns the Pavezzo guest home on the Cyclaidc island of Ios, told the GTP.

In this direction, the municipality announced the launch of its recently mapped and newly established hiking trails, which Fakos said have already drawn in climbers and hikers.

The island is also planning its 2nd Ios Run, named in honor of Homer, who is said to have been buried on the island. The sporting event includes a half marathon, as well as 5- and 10km runs set for May 27.

For Fakou, the key to guaranteed tourism growth is policy, consistency and stability… and a warm smile.

ITB is About Getting Feedback & Forecasts for a Better Product