Indications from the Serbian travel market are positive for the Northern Sporades region this year as the number of flights have increased compared to 2016, Greek hotel management company Spyrou Philoxenia announced following its participation in the international travel exhibition Sajam Turizma 2017, held in Belgrade from February 23 – 26.

Sajam Turizma is the premier travel exhibition in Serbia, drawing thousands of visitors and providing a meeting platform for business professionals in the travel industry in addition to direct sales of holiday packages.

According to Spyrou Philoxenia, the largest Serbian tourism organization has planned for an aircraft of 139 seats for the island of Skopelos this season. “Following the successful initiative of Spyrou Hotels to create strategic partnerships and offer accommodation on a commitment basis, the Serbian travel market has matured, opening the path for further development”, said George Michalis, General Director, Spyrou Philoxenia. “This of course has resulted in important benefits and positive impact on the local economy of the island”, he added. 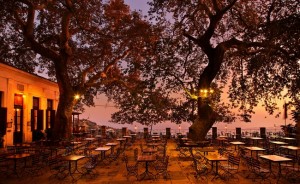 In addition to the island of Skopelos, Serbian travel professionals showed interest in the other regions of Greece where Spyrou Philoxenia has Affiliate Member Hotels including the region of Pelion. The region attracts new and repeat holiday makers due to its proximity and accessibility through land transportation, making it an ideal destination for travel by car and by organized tours by bus.

“From Sajam Turizma, we reconfirmed that beautiful sandy beaches, traditional cuisine, warm hospitality and authentic experiences are high on the Serbian holiday preference list,”  said Ioanna Blaki, Deputy Manager – Sales and PA to General Director, Spyrou Philoxenia, adding that destinations such as the Sporades and Pelion were perfect choices that matched all the desired criteria. “We were very well received and look forward to welcoming an increased number of Serbian holiday makers this year”, Blaki said.

Currently operating five properties on the island of Skopelos, in addition to managing reservations and sales for other properties there, Spyrou Philoxenia is expanding its roster with new partnerships being announced throughout Greece. Current Spyrou Philoxenia Affiliate Member hotels include Kaimak Inn in Kaimaktsalan, Central Macedonia – Greece, Chania Hotel, Chania Palace, Aglaida Hotel & Apartments, and Iris Guesthouse in Pelion, Archontiko Kaltezioti and Nymfasia Arcadia Resort in Arcadia, Peloponnese, and Hotel Agnanti in Alonnisos.

Sabre Delivers a Year of Strong Growth in 2016