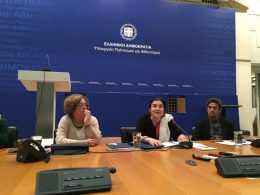 Koniordou said the funds will be released immediately for the restoration of the site in northeastern Greece, where a vast grave dating back to Alexander the Great’s era was uncovered as well as for works to unify the archaeological sites of Amphipolis and create specially designed trails for visitors.

The minister added that other works underway include the upgrade of five theaters (Ancient Gitana Thesprotia, Ancient Ambracia, Nikopolis, Kassopi and Dodona) which are linked through the Epirus cultural route.

On a final note, Koniordou added that the ministry was currently in the process of hiring 1,314 museum and archaeological site guards for the season. “We hope the staff will be their positions as of early April,” she said.

Koniordou added that e-ticket access will initially run as a pilot program at the Acropolis, Mycenae, Knossos and Messina sites.