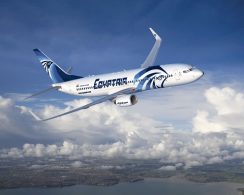 Egyptair, the national airline of Egypt, is to deploy its second new 737-800 Next Generation aircraft on its scheduled flights between Athens and Cairo, with effect from June 2017.

The delivery of the second aircraft 737-800 Next Generation is part of a $864 million deal Egyptair made with Boeing in July 2016 for the purchase of nine Next-Generation 737-800s to add to its fleet.

“With the upcoming launch of our second new aircraft BOEING 737-800 Next Generation on the Athens-Cairo route, we share with Greece, not only our common history and the powerful friendly ties between the two countries, but also the transition of EGYPTAIR into a new era”, said Salah Tawfik, the regional director of the company for Greece and Cyprus.

The second aircraft 737-800 Next Generation by BOEING will also cover international flights of Egypt.

Egyptair currently operates 22 737-800NGs and when the seven airplanes on order have been delivered will comprise the largest single-aisle aircraft type in its fleet. The 737-800 is the best-selling version of the successful Next-Generation 737 family and is known for its reliability, fuel efficiency, and economic performance.

Egyptair has been flying to Greece for the past 60 years.