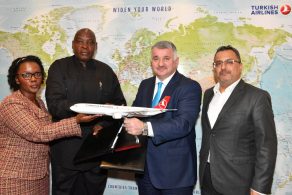 Turkish Airlines and Air Namibia recently signed a codeshare agreement that will be effective as of March 1 and cover routes between Turkey and Namibia.

According to an announcement, the new codeshare agreement is bound to broaden the commercial partnership between the two companies and their respective countries. At the same time, passengers of both airlines will be given more travel options between Namibia and Turkey.

“Air Namibia is a small airline and in order to improve its competitiveness in this high competitive industry, it is important to have a strategic partner, as Turkish Airlines… We believe that this will be just one of the many areas of cooperation between Turkish Airlines and Air Namibia”, Namibia Deputy Minister of Works & Transport Sankwasa James Sankwasa said during the signing ceremony at Turkish Airlines’ Headquarters in İstanbul.

Under the terms of the agreement, Air Namibia and Turkish Airlines are planning to place codes on unilateral flights of SW on Windhoek – Johannesburg v.v. / Windhoek – Frankfurt v.v., and unilateral flights of TK on İstanbul – Johannesburg v.v. / İstanbul – Frankfurt v.v. Also it has been considered that when SW introduces the Windhoek – İstanbul v.v. flights in future, the codeshare agreement be expanded by placing the code to include beyond İstanbul flights.

“We believe that this partnership between Turkish Airlines and Air Namibia will bring benefit to both carriers, not only from a commercial perspective, but also in cultural interactions between Turkey and Namibia while promoting business travel between two countries”, Turkish Airlines Deputy Chairman and CEO Bilal Ekşi said.