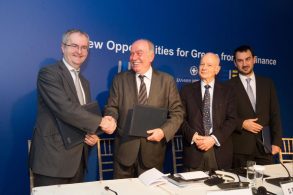 In efforts to facilitate business lending to Greek SMEs and midcaps and bolster youth employment, the European Investment Bank (EIB) signed a 50 million euro loan with Pancretan Cooperative Bank, it announced on Thursday.

The EIB has agreed to provide 50 million euros to support financing by Pancretan Cooperative Bank of eligible projects undertaken by small- and medium-sized enterprises and midcaps.

“I am very pleased to be in Athens today to further extend the EIB’s ambitious new credit line for SMEs and midcaps, which are a vital pillar of the Greek economy,” said Jonathan Taylor, EIB vice president responsible for lending in Greece.

“The EIB remains committed to supporting private sector growth and the real economy, as well as continuing to invest in young people,’’ he added.

The EIB launched a new credit line last year of up to 1 billion euros to Greek banks and inked deals with Alpha Bank, Eurobank, National Bank of Greece and Piraeus Bank for a total amount of 400 million euros.

“The year 2017 marks 10 years of successful cooperation between Pancretan Bank and the EIB. During this period, both banks countersigned agreements totaling almost 250 million euros, an amount which significantly contributed to the creation and maintenance of viable SMEs and job positions,’’ said Nikos Myrtakis, vice president Pancretan Cooperative Bank, adding that it developed 500 new jobs and retained more than 3,000.

“Through the new agreement of 50 million euros, Pancretan Bank will be able to support projects of SMEs and midcaps, through investment loans and provision of working capital. It is anticipated that enterprises belonging to growing sectors of the economy like tourism, energy, the primary sector, exports, but also those which are currently facing challenges accessing financing in the areas of trade and manufacturing, will be actively supported,’’ Myrtakis added.