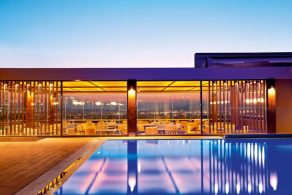 The Wyndham Grand Athens was one of the 5-star hotels that opened its doors in 2016.

Greece’s hospitality industry is seeing all the more 5-star hotels at major destinations across the country, offering visitors high quality services and at the same time attracting higher income travelers.

Findings by the Institute for Tourism Research and Forecasts (ITEP) presented at the Hellenic Chamber of Hotels (HCH) annual general assembly held last week at the Metropolitan Expo in Athens, revealed among others that the rate of 5-star hotels has tripled in 2016 representing 16.6 percent of the total hotel capacity compared to only 5 percent in 1990, with the number of lower category hotels on the decline by 6.7 percent.

According to ITEP, employment at hotels increased by 4 percent in May and August 2016 compared with the corresponding months in 2015.