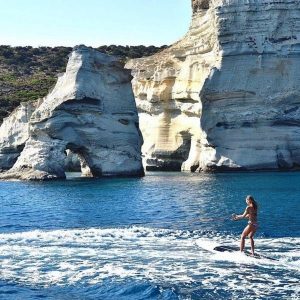 Vogue Australia magazine has placed the Cycladic island of Milos among the top five destinations to visit in 2017, describing it as an “undiscovered paradise”.

The island was recently featured by travel stylist Maria Paradisis in an article that included her most stylish – and Instagrammable – picks for where to travel to this year.

“This island of volcanic origin features more than 70 beaches – from Sarakiniko, the most photographed thanks to its unique lunar landscape, to Kleftiko, an old pirates’ hangout”, she noted.

Paradisis also informed that the island is known for being the location of the statue of Aphrodite (discovered in 1820 and now on permanent display at the Louvre Museum in Paris and known as the Venus de Milo) and for its beaches that are quite different compared with other Greek islands due to their interesting rock formations.

Milos Mayor Gerasimos Damoulakis said that Australia is a market of interest to the island.

“The mention of Milos in this prestigious magazine honors us and is promising for our island… I am certain that soon we will have more good news from Australia”, he said in an announcement.

The other four destinations suggested by Paradisis include Cartagena on the northern coast of Colombia, the “tea trails” in Sri Lanka, the small town of Taormina in Sicily, Italy and Dubrovnik in Dalmatia, Croatia.