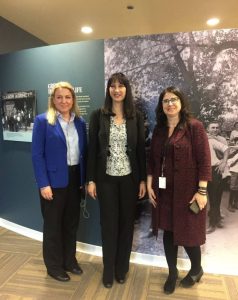 Tourism Minister Elena Kountoura held discussions with tour operators and travel agents during her recent visit to Chicago, aiming to further promote Greece as an attractive destination in the American market.

During her meetings held in the Greek Consulate, Minister Kountoura explored the potential of boosting arrivals of Greek-American visitors to Greece and attract new tourists from the US market for 2017 and 2018.

The Greek tourism minister also gave interviews to expatriate media based in Chicago and presented the national tourism policy, which has been in force since 2015 and will run until 2019. Kountoura underlined the continuous development of Greek tourism during the past two years, which is reflected through the significant increase in arrivals to Greece and tourism investment projects in the country.

Referring to the US as a priority market for Greece, she listed the ministry’s targeted actions to further open up the market, adding that American arrivals have already increased significantly in 2015 and 2016. She added that the messages for 2017 arrivals from the US are very positive.

While in Chicago, the minister also visited the National Hellenic Museum, the biggest Greek museum abroad which houses more than that 11,000 exhibits and collections.

Prior to her visit to Chicago, Minister Kountoura had attended the New York Times Travel Show in New York.