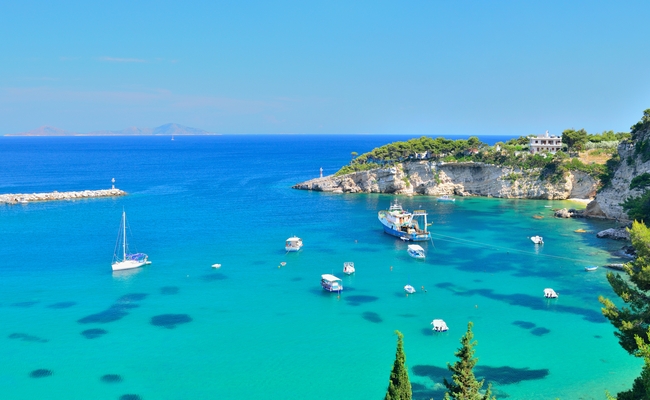 The president of the Tourism Development and Promotion Committee of the Municipality of Alonissos, Kiki Anagnostou, recently wrapped up a visit to Athens in which she held a series of high level meetings that addressed issues concerning the island.

The president of the Tourism Development and Promotion Committee of the Municipality of Alonissos, Kiki Anagnostou, with the sales and advertising manager of Greek Travel Pages (GTP), Charis Brousalian.

Anagnostou participated in the first Opentourism 2017 event that focused on “Islands and tourism, the present and the future” and took place at the Hilton Athens hotel. Representing the Municipality of Alonissos, she referred to the problems that islands are currently facing regarding their access to the mainland and the repercussions to tourism. During the event, Anagnostou participated in a panel regarding the progress of Greece’s seaplane network and exchanged views with the president of Hellenic Seaplanes, Nikolaos Charalambous.

During her stay in the Greek capital, Anagnostou met with the advisor of the Kifisia Flower Show, Ilias Tsoutsoplidis, and discussed ways to expand the municipality’s cooperation in the event that celebrates the regeneration and beauty of nature.

Anagnostou also attended a fruitful meeting with the sales and advertising manager of the professional tourism guide Greek Travel Pages (GTP), Charis Brousalian, and discussed ways to boost the tourism promotion of Alonissos to markets abroad through the media’s digital marketing solutions.

She also held meetings with media representatives and travel bloggers and discussed the island’s tourism promotion to the domestic market. The Municipality of Alonissos is expected to hold press trips to the island in the near future.