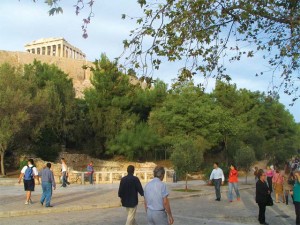 Although forecasts on incoming tourism to Greece in 2017 are encouraging, the Greek Tourism Confederation (SETE) on Thursday urged sector professionals not to rest on their laurels this season.

In its January 2017 statistical bulletin on Greek tourism , SETE warned that the continued delay in the second review of Greece’s bailout program and the broader political-economic instability were affecting the market.

Moreover, the association said that the extremely high taxation of the Greek tourism product was negatively affecting the competitiveness of all businesses in the sector.

According to SETE, another adverse development for tourism was the recent decision of Greece’s Council of State to rule against the optional operation of shops on Sundays. “This is especially negative for the development of city break tourism”, SETE said.

SETE added that the conclusion of the privatization deal concerning the plot at Kassiopi on Corfu was a positive development as some 35,000 square meters of mild tourism projects will be created.

Regarding the sector’s progress last year, SETE said that 2016 ended with conflicting data. Although tourist arrivals increased for the fourth year in a row, revenue recorded a decrease.

The association said that data showed that air arrivals rose by nine percent in 2016, while road arrivals recorded a marginal increase of 0.6 percent. However, revenue from tourism last year recorded a 6.6 percent drop due to the decline in the average per capita expenditure of tourists. According to SETE, the drop in average spending is a consequence of the general decrease in expenditure internationally and increase in tourists opting for last-minute’ summer deals.