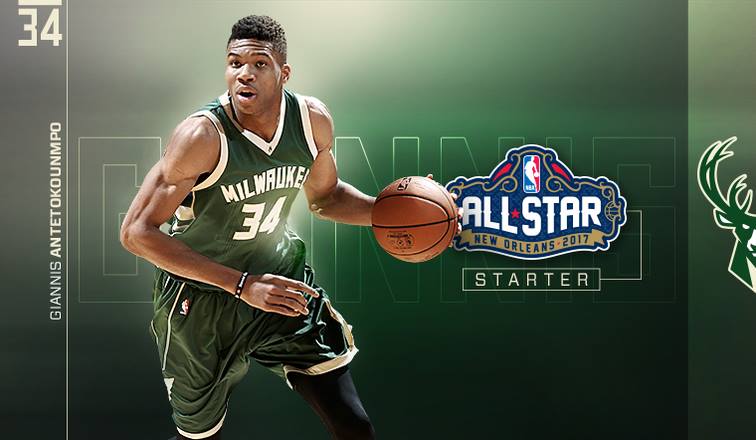 Greece’s very own Giannis Antetokounmpo will join DeMar DeRozan, Anthony Davis and Jimmy Butler for their debut as starters in the NBA All-Star 2017, the NBA announced this week.

The starting lineups were revealed on Thursday for the 66th NBA All-Star Game, which will be played on February 19 at New Orleans’ Smoothie King Center.

Playing for the Milwaukee Bucks, in his fourth NBA season 22-year-old Antetokounmpo has already averaged 23.7 points, 8.7 rebounds, 5.6 assists, 1.8 steals per game and 2.1 blocks per game, leading the Bucks in every category.

Antetokounmpo, known for his impressive seven-foot-three wingspan, will be the first Buck player voted starter in the All-Star Game since Sidney Moncrief in 1984 and the youngest non-American All-Star Game starter, after China’s Yoa Ming.

“This is a great honor for Giannis and a testament to his work ethic and commitment to his craft,” Bucks head coach Jason Kidd said in a statement.

“I know Giannis will cherish this opportunity to not just showcase his game, but to play alongside and learn from the league’s best.”

”Thank you so much to all of the fans! I’m so grateful for this opportunity to start in the NBA All Star Game! Now let’s get that W tomorrow!’’ Antetokounmpo tweeted this week.

The Athens-born player of Nigerian descent, who received more than 1.6 million votes, also thanked Greece on twitter: “I would like to thank each and every one of you from the bottom of my heart for your support throughout these days… You all took an active part in making my dream come true… I really appreciate it! You can be certain that I will be playing for you too at the All-Star Game. Thanks Greece!”

‘International Year of Sustainable Tourism for Development 2017’ Kicks Off