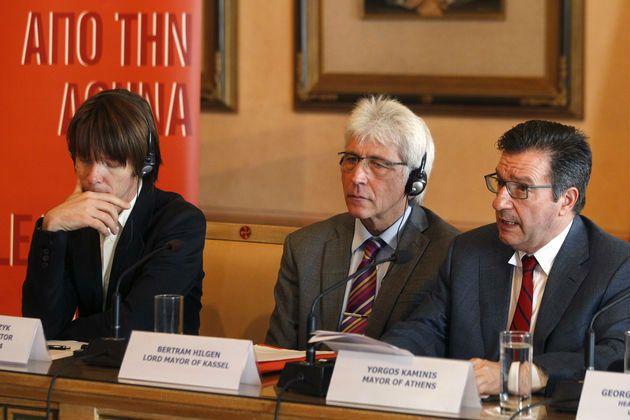 One of the world’s leading contemporary arts shows, the “documenta 14: Learning from Athens”, is set to kick off in Athens on April 8 and run through to July 12, bringing the Greek capital into the international spotlight.

The opening of the highly anticipated show will take place on April 6-8.

Athens municipal authorities gave the go-ahead this week so that the city’s central squares and locations including Kotzia, Syntagma and Avdi squares as well as the Areopagitou pedestrian walkway prepare to co-host for the first time in six decades the “documenta 14 show, which according to Athens Mayor Giorgos Kaminis has placed ”Athens at the heart of cultural interest… as major international media outlets focus on Athens as a dynamic modern cultural and art destination urging their readers to visit”.

“More than 5,000 art authorities, including museum directors and collectors, have thus far confirmed their participation in the top event, including 1,400 journalists from around the world,” Kaminis added.

Directed by Adam Szymczyk, this is the first time since documenta14’s  inception in 1955, that the contemporary art exhibit held exclusively in the German city of Kassel, will be jointly hosted by a second city. After Athens, the show will open in Kassel on June 10 and run through to September 17.

Kaminis has called the event a “multiple challenge” and a “gift for our city… which will leave a legacy for Athens”.

Greek carrier Aegean Airlines will be supporting the event by launching direct flights between Athens and Kassel from March to June. The event is also backed by Athens International Airport, the Greek Tourism Confederation (SETE), Marketing Greece and the Athens-Attica Hotels Association.

EFEA 2017: Events Industry Professionals Get Ready to do Business in St. Petersburg

GR80s: Athens Takes a Journey to the Greek 80s at Technopolis Expo