SWISS to Bring Air Show to the 2017 Lauberhorn Ski Races 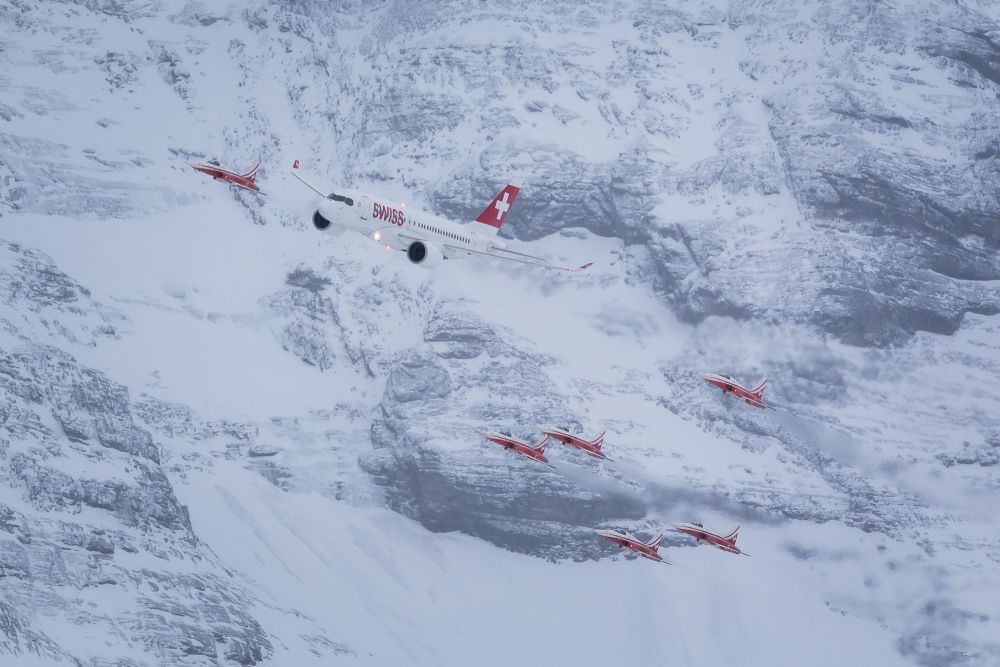 SWISS performed a spectacular flypast on Thursday over the famous Lauberhorn ski race course escorted by the Swiss Air Force’s display team, the Patrouille Suisse. The event was a Lauberhorn flypast début for the Bombardier CS100, SWISS’s advanced new short- and medium-haul twinjet.

Swiss International Air Lines (SWISS) will once again serve as the official airline for this year’s 87th International Lauberhorn Ski Races, which will be held in Wengen in the Bernese Oberland during January 13 to 15, as part of its ongoing commitment to sports.

The highlight in this year’s involvement will again be provided by a flypast over the course by a SWISS aircraft accompanied by the F5-E Tigers of the Patrouille Suisse, the air display team of the Swiss Air Force.

For this year’s flypasts SWISS will be bringing one of its Bombardier CS100s, the state-of-the-art new short- and medium-haul twinjets which it put into service last year. SWISS is the world’s first operator of this totally new aircraft, which is setting new benchmarks with its inflight comfort, its operating economics and its environmental credentials.

Weather permitting, the flypasts will be conducted between the combination downhill and slalom on Friday, January 13 and before the downhill on Saturday, January 14 and are expected to provide a genuine spectacle against the breathtaking backdrop of the Eiger, Mönch and Jungfrau peaks.

SWISS will also offer another highlight on the ground at this year’s Lauberhorn event. On both Friday and Saturday, the SWISS Pilot Combo – a band composed exclusively of current SWISS cockpit personnel – will be performing in the World Cup Village in Wengen from 16:00 onwards. And as a further attraction, visitors viewing the Saturday race from the Girmschbiel can look forward to a small surprise with SWISS flight vouchers to win.

As the airline of Switzerland, SWISS attaches great importance to sporting involvements. On the winter sports front, as well as supporting the International Lauberhorn Races, the company is also the official airline of Swiss-Ski and Swiss Ice Hockey, and of the 2017 FIS Alpine World Ski Championships, which will be held in St. Moritz. SWISS also serves as official airline to Swiss Athletics, the Weltklasse Zürich international athletics meeting, the Swiss Football Association and the Swiss Handball Federation.

SWISS is proud to support the national teams of all these associations by flying them to and from their training and major events and competitions all over the world, and is equally proud to bring some of the world’s finest athletes to their events in Switzerland.

East Med Yacht Show 2017 to Open in Piraeus in May

New Tourism Expo Puts the Mediterranean in the Spotlight