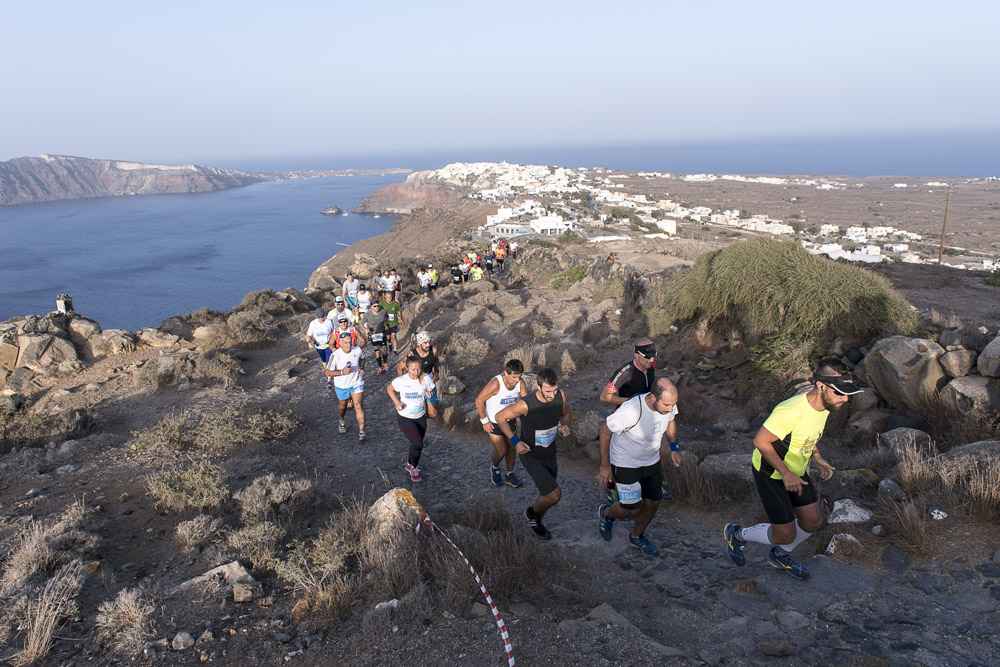 “Santorini Experience”, in its second consecutive year, exceeded all expectations in registration and hotel occupancy numbers as it attracted the global interest of athletes, participants and visitors: 3 Olympic Champions, 2 World Champions, 1 European Champion, 1 Greek Champion and hundreds of professional and amateur athletes of all ages (75 years old was the oldest athlete) took part in the activities of the sports weekend while thousands of visitors swarmed the island to attend the unique event. 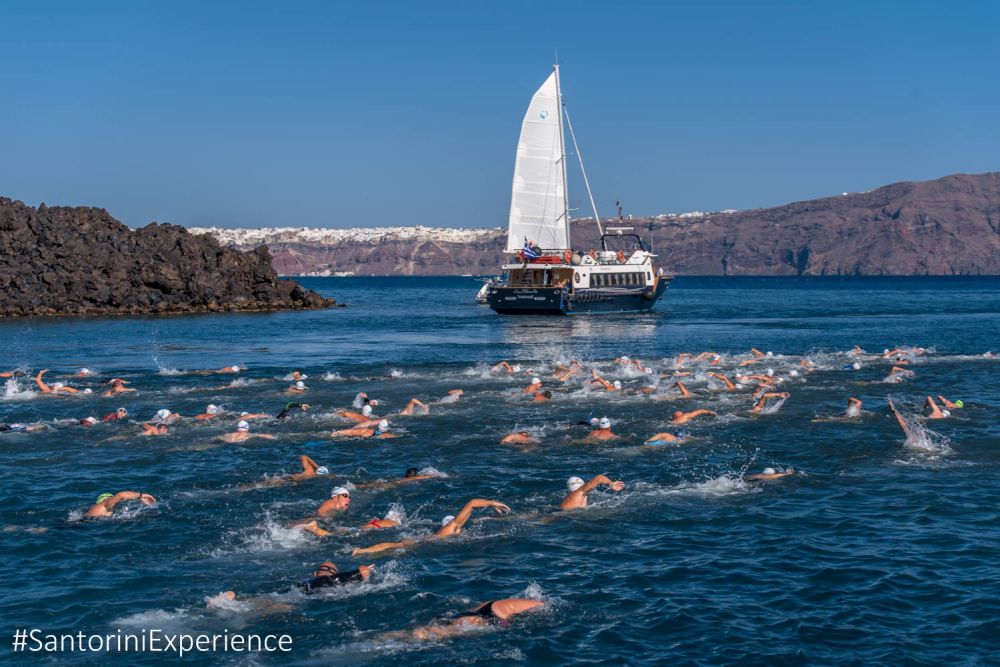 The extroversion of sports tourism was the first and basic target of this year’s event. “Santorini Experience” will have international promotion as its Official Broadcaster FOX Sports of FOX Networks Group will show the event’s sports documentary to millions of homes in Europe, Asia and Africa.

Athletes and visitors of the event travelled to the island with the official airline partner of “Santorini Experience” Ryanair, which in response to the huge demand for the sport event added 5 additional flights (beyond its 2 daily scheduled) to the Athens-Santorini route, carrying a total of 25 flights in 10 days with an occupancy reaching 100%, contributing to the overall promotion of the destination.

For the ferry access to the island, Blue Star Ferries took care of the immediate and safe service of participants, the convenience of attendants and “Santorini Experience” spectators by offering 50% discount on ferry tickets and recorded an increase to its bookings during the days of the event.

“Santorini Experience 2016” schedule was even richer this year compared to the first year, having for the first time the support and auspices of the Greek National Tourism Organization.

More than 1.400 children participated in all children’s activities of the event. On Wednesday, 5th and Thursday, October 6th, the Kids’ Athletics activity was presented for the first time in Thira Stadium (Panthiraikos) at Fira by the Olympic and World Champion in 400m. hurdles Periklis Iakovakis. The activity aimed at getting children acquainted with the track and field sports, as it has been developed and established by experts from IAAF (International Association of Athletics Federation) and is officially implemented in Greece by the Hellenic Athletics Federation (SEGAS) in cooperation with the Ministry of Education. 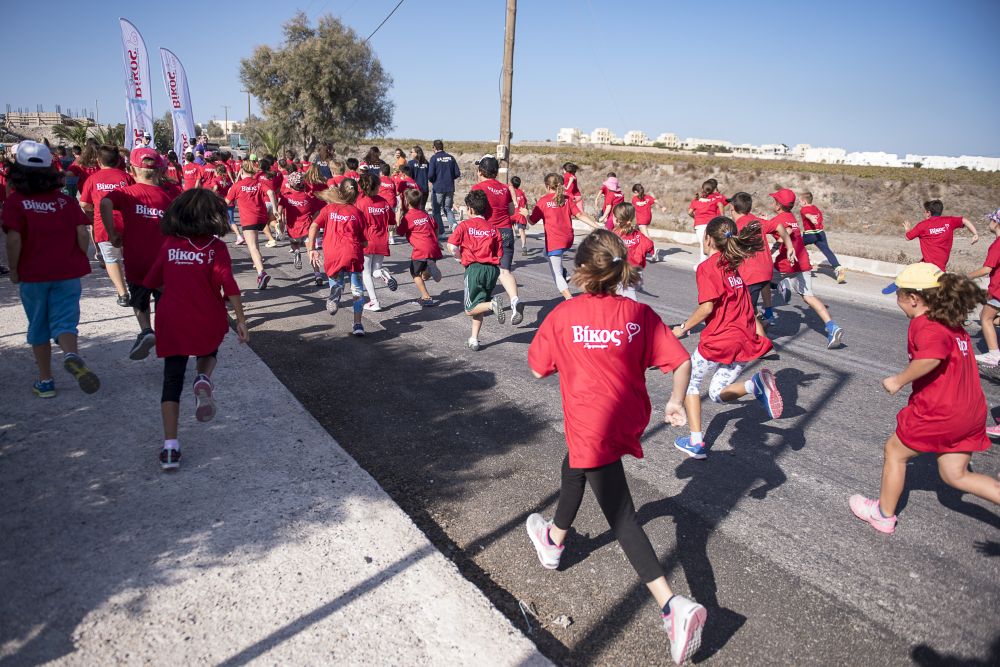 On Friday, October 7, students ran the 1km running route that was held at the Indoor Hall of DAPPOS, at Fira.

At noon, the twice Silver Olympic Medalist, Alexandros Nikolaidis undertook to introduce the secrets of TaeKwonDo martial art to beginners and advanced athletes, at the Indoor Hall of DAPPOS, at Fira.

On Friday, a Meet & Greet was held with the great Silver Olympic Medalists Spyros Gianniotis and Alexandros Nikolaidis and top athletes such as the World Champions Kelly Araouzou and Antonis Fokaidis, the European Champion Giorgos Arniakos and the Greek Champion Dimitris Negris, at Alafouzos Sport store (official sponsor of the event) at Fira that supported for the second consecutive year the organization and helped its implementation from the beginning.

The former marathon runner, holder of national best performance on the classical route, running coach and director of All About Running, Nikos Polias, who designed the Santorini Experience 2016 routes. Photo © Vangelis Patsialos

On Saturday, October 8th, catching the limit of 500 participants (under the safety limit of the paths set by the former marathon runner, holder of national best performance on the classical route, running coach and director of All About Running, Nikos Polias who planned the routes) runners of all abilities had the opportunity to run at the exceptional routes of 5km (running and dynamic walking), 10 km and 15 km (total positive altitude: 834 m.) overlooking the unique images of the volcano, the Caldera and the sites Imerovigli, Firostefani and Oia. All routes had the desalination plant in Oia as start and finish point.

On Saturday night, the Municipality of Santorini and the Municipal Sports Cultural Environmental Organization of Santorini (D.A.P.P.O.S.) honored at an event held at the Petros M. Nomikos conference center in Fira, the silver Olympic medalist and World Champion in open water swimming Spyros Gianniotis; the Federal Technical Coach of Swimming, Nikos Gemelos; the World Champion in open water swimming, Kelly Araouzou; the President of the Hellenic Swimming Federation, Dimitrios Diathesopoulos; and the twice silver Olympic medalist in TaeKwonDo, Alexandros Nikolaidis.

On Sunday, October 9, participants of the sport of swimming (with the presence of the elite of the Greek national open water swimming team) had the opportunity to swim in the unique swimming route of 1.5 mile (2.4 km) of “Santorini Experience”, from the volcano to the old port in Fira.

The route was designed by the Federal Technical Coach of Swimming, with Olympic and World distinctions in open water swimming and Technical Director of the event in swimming, Nikos Gemelos. 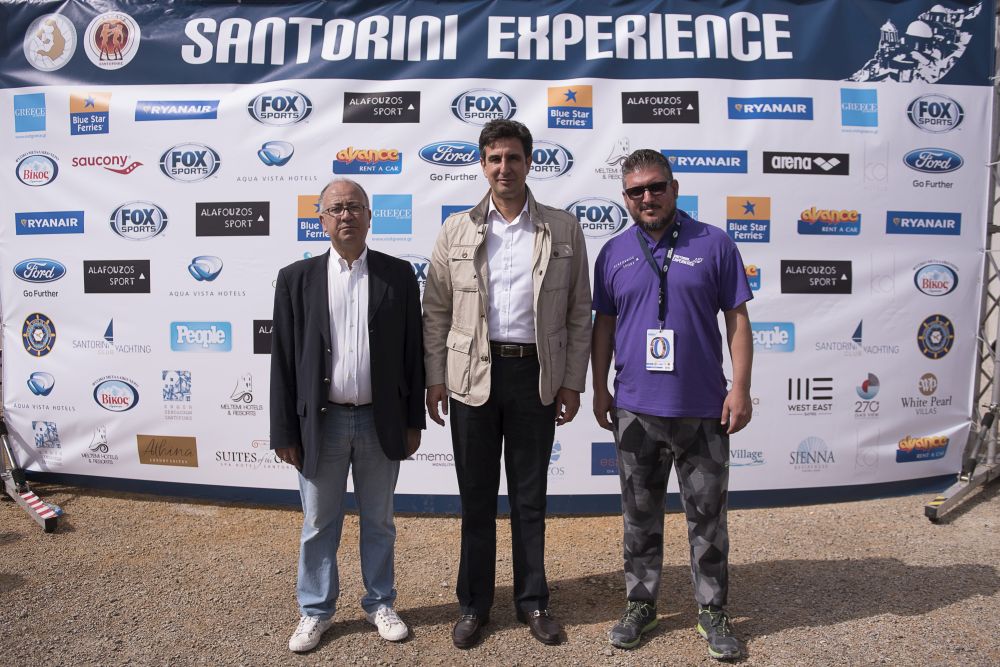 The event was held under the auspices of the Hellenic Swimming Federation (KOE), something that happened for the first time in open water swimming, at a sports tourism event, marking the high participation from swimmers and swimming clubs from all over Greece and abroad.

The swimming day was supported by the Santorini Boatmen Union, Santorini Yachting Club, National Lifeguards of Santorini, Aegean Divers and the Lifeguard Schools from Athens, Piraeus (European Lifeguard School) and Katerini (Lifeguard Patrol). More than 25 vessels and more than 70 people in the water helped in the race’s smooth running and safety.

For the second consecutive year, athletes and organizers moved with the safety and efficient engines of the cars of Ford Motor Hellas, the official supporter of “Santorini Experience”. The athletes who took part in the event had also the opportunity to quench their thirst with the Natural Mineral Water “Vikos” that contributes to the good functioning of the body during sports. 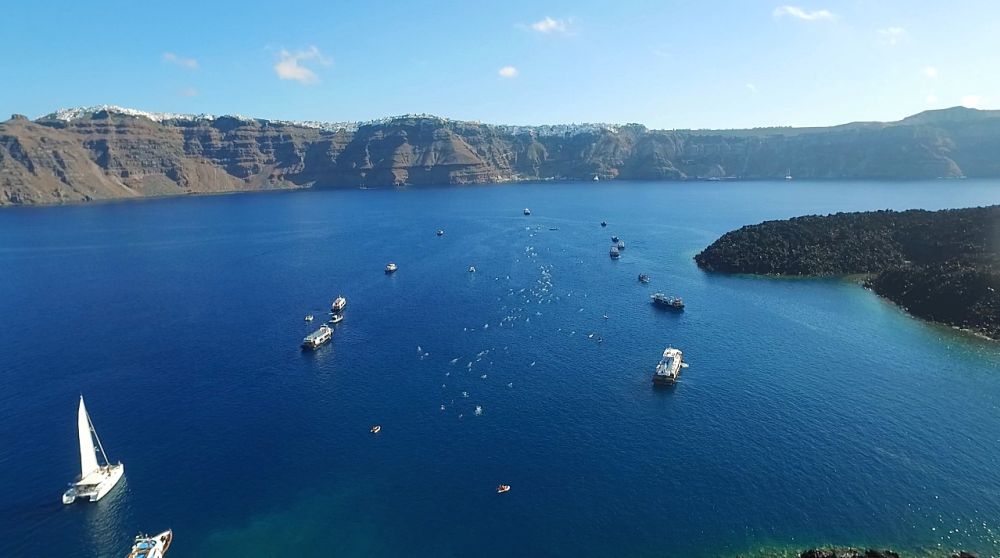 Part of the “Santorini Experience” revenues will be given to the Give & Fund created to support the rehabilitation of Maria Sampanidou or “Iron Samba”. Anyone can support Maria Sampanidou through the following page: http://www.giveandfund.com/giveandfund/project/Ironsamba

The event received very significant support by Avance Rent A Car, which covered with its fleet and its exemplary service, the event’s and all visitors’ needs in car rentals.

Running with a view to Caldera. Photo © Elias Lefas

After the end of “Santorini Experience 2016”, Santorini Mayor Anastasios Nikolaos Zorzos said: “Santorini Experience has already become a tradition for our island and both locals and visitors embraced with great fervor. The volcanic soil and the energy that our place transmits in conjunction with the sports activity, guarantee a unique life experience. Santorini island offers alternative forms of tourism throughout the year and Santorini Experience proves it. We continue this effort; we support and participate actively so that our island remains in the first preference positions of the visitors. Many thanks to all organizers, sponsors and our volunteers; without them we would not realize this successful event”.

On his part, D.A.P.P.O.S. President Eleftherios Tzouros noted: “The beautiful, magical, unique and endless journey of Santorini Experience continued in 2016 even more dynamically and reminded us that the original idea to borrow the caldera of Santorini so that the participants will test their limits was and remains unique. Santorini Experience 2016 opened the sails and already showed us from its second year its dynamics fully satisfying the objectives we set in the beginning. The joy, the smile and satisfaction on the face of the participants is the energy that we got so that this sports journey will never end. Activities such as the kids’ athletics, the students running and the TaeKwonDo training of students highly demonstrated how interested we are in the sports education and the progress of children of Santorini. I would like to also say a big thank you to all our sponsors and volunteers”.

A runner passing through the alleys of Santorini, in Caldera. Photo © Elias Lefas

The Greek Travel Pages (GTP) was a Strategic Communication Partner of the “Santorini Experience” event.