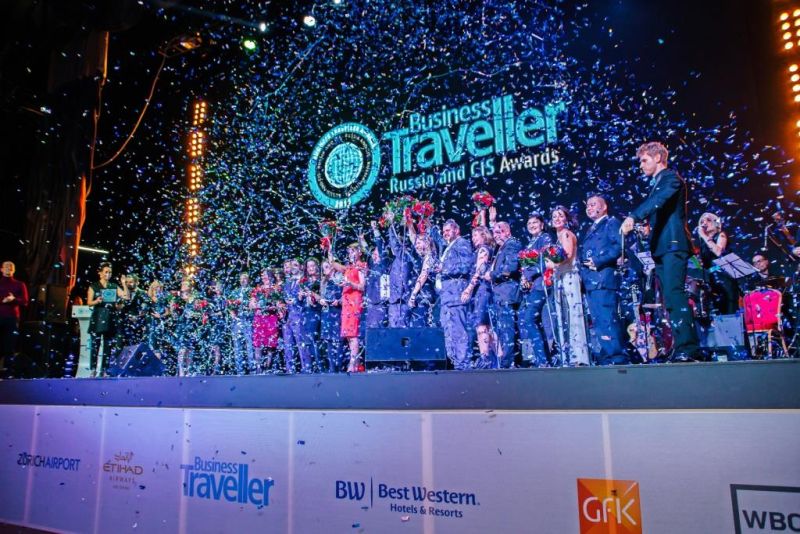 The best of the best were honored at the first Business Traveller Russia and CIS Awards ceremony held at the Izvestia Hall in Moscow on September 26.

Held in Russia for the first time under the auspices of Business Traveller magazine, the event welcomed an audience of chief executives of international and Russian companies, airport directors, representatives of the hotel industry, car rental companies, embassies and tourism offices of different countries of the world, graduates of the leading business schools, representatives of state authorities of the federal and regional levels.

Moscow was honoured with the highest award in the nomination “Best City for Business and Event Tourism Worldwide”, leaving behind such cities as Rome, Madrid, Paris, Singapore, Saint Petersburg, Kazan and Nizhny Novgorod.

The event, hosted by actress Olga Kabo and director of Solyanka Art Gallery, Fedor Pavlov-Andreevich, was opened by the founder of Zelenski Group of companies and the establisher of the Russian edition of Business Traveller – Vadim Zelenski. Guests were offered a fantastic performance by the winners of Art Vision VJing contest of the Circle of Light Moscow international festival in a special category of the Business Traveller Magazine – “Travel. Vision of the Future”.

The Business Traveller Awards have won the reputation of an authoritative award as award laureates are chosen by the votes of readers and not by a jury or an expert board.

The importance of the Business Traveller Russia and CIS Awards for the Russian business travel market lies in determination of the loyalty degree and customer satisfaction level, the so-called positive index of Customer Experience. Due to the specially developed respondent questionnaire and the opinion poll of the representatives of various professional spheres, award results can help to determine quality standards of travel services and the needs both of the corporate and the individual traveller. Customer satisfaction is the key to the development of the Russian hospitality sector, incoming and outcoming travel.

Business Traveller Russia and CIS Awards 2016 ceremony was held with the support of Moscow City Government.

The Greek Travel Pages (GTP) was a media partner of the Business Traveller Russia and CIS Awards.

Etihad Named ‘Airline of the Year’ for Third Time by UK Magazine, TTG