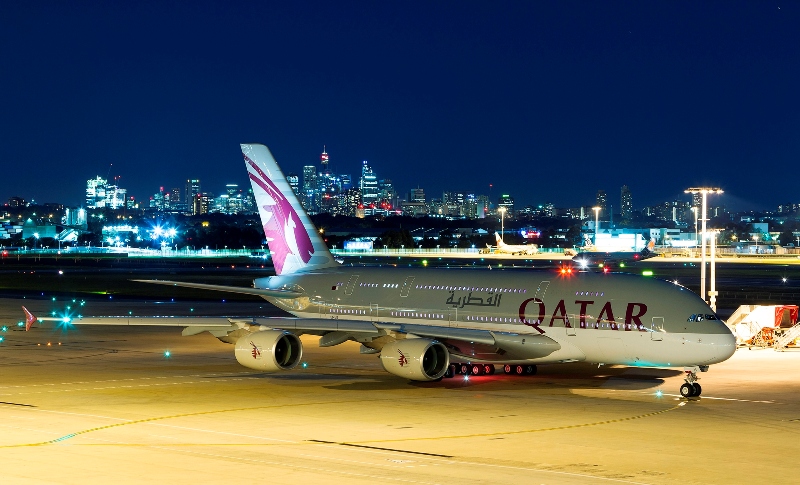 Qatar Airways A380 aircraft makes its Australian debut in Sydney.

Sydney has become Qatar Airways’ first destination in Australia to be served by the super-jumbo A380 aircraft, just six months after it joined the carrier’s global network.

Following the route’s inauguration with the Boeing 777-300 on March 1 this year, Qatar Airways has seen a steady growth in demand for its service on the route. The 517-seater A380 aircraft increases Qatar Airways’ current daily capacity by 44 per cent on this route to meet the growing travel and trade demand.

“Qatar Airways brings travellers from Australia to more destinations in Europe, the Middle East and Africa than any other airline serving Australia today… What better way to serve travellers from this key destination than to introduce our iconic A380 to the country, starting with the nation’s biggest hub, Sydney”, Qatar Airways Group Chief Executive Akbar Al Baker, said.

The 517-seat capacity is spread across twin decks in a tri-class configuration of eight seats in First Class, 48 seats in Business Class and 461 in Economy Class, featuring world-class amenities and first rate services that set it apart from other aircraft. Passengers travelling from Sydney to London and Paris can enjoy the Qatar Airways A380 experience throughout their journey to these two European destinations.

According to Sydney Airport, Qatar Airways’ Doha-Sydney service already generates an estimated 3,000 jobs and contributes more than $240 million to the economy per year, plus it provides passengers with more choice and connectivity.