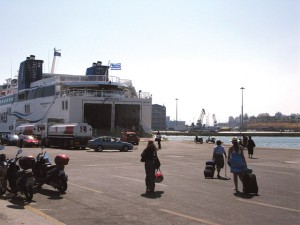 The country’s coastal shipping sector is seeing its revenues drop due to reduced traffic particularly to the Northeastern Aegean islands.

“Apart from the transportation of migrants, ferry traffic this year appears to be at the same levels with last year with an obvious drop in tourist traffic to the Northeastern Aegean islands,” president of the Association of Greek Passenger Shipping Companies (SEEN), Michalis Sakellis, said recently to the Athens News Agency (ANA).

Traffic in 2015 was also slow compared to a year before with Cyclades routes posting a 7.5 percent drop, Crete a 12.4 percent decrease and routes from the port of Rafina down by 2.5 percent. At the same time, passenger shipping in 2015 was down by 3,300,000 passengers compared to 2009.

Sakellis attributes the sector’s poor performance starting in 2009 to Greeks’ reduced purchasing power as they account for 75 percent of all traffic. He added that travelers are also now opting all the more for air transport to Greek destinations.

Sakellis added that major ferry companies have lowered their rates offering discounts and cheaper tickets to loyal customers. “Already 50 percent of all passengers (with their vehicles) purchase tickets at a 30-50 percent discount for cars and 10-30 percent for passengers,” he noted.

SEEN’s president underlined, meanwhile, that levies charged on tickets are not going into the upgrade of the country’s ports, the majority of which are problematic, and called for measures.