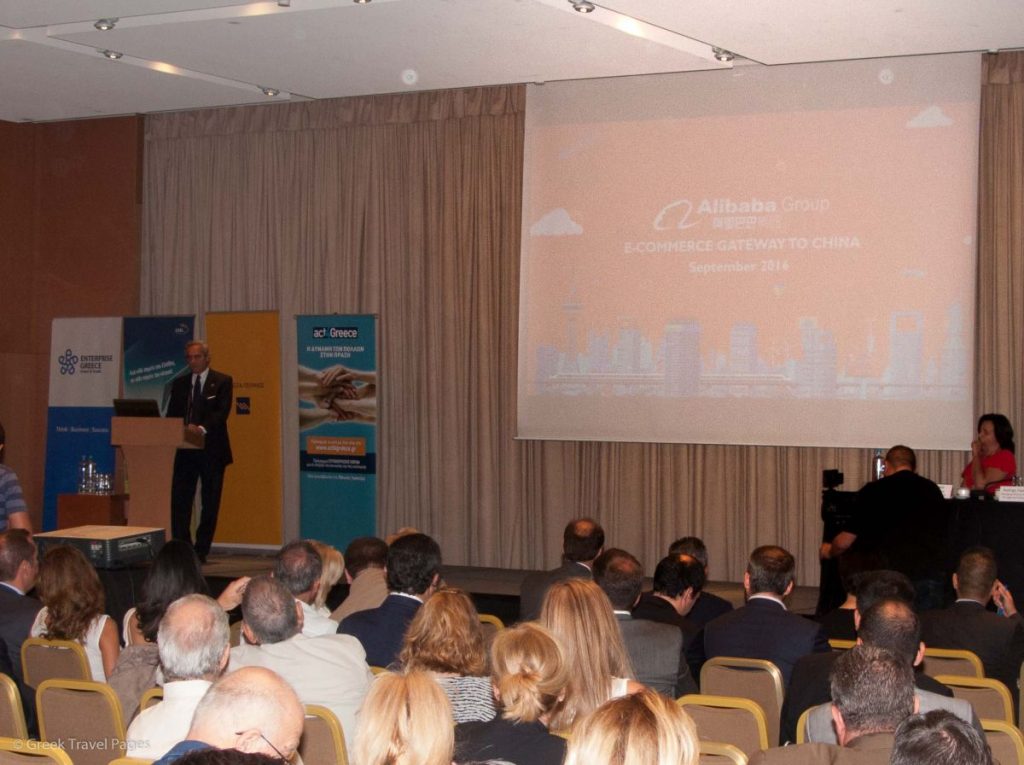 A new page in Greece’s trade and tourism has opened with the recent discussions of Greek ministers and businessmen with representatives from the world’s largest e-commerce group, Alibaba, according to the Athens Chamber of Tradesmen.

On the initiative of the chamber, Alibaba came to Athens this week for a two-day event to explore ways to offer services to Greek trade and tourism entrepreneurs interested in distributing their products in the Chinese market and attracting more Chinese tourists to Greece.

On Tuesday, September 13, Alibaba representatives met with government representatives at the Foreign Ministry and informed on their investment plans for the Greek market. On Wednesday, September 14, some 600 Greek businessmen active in exports and tourism attended the chamber’s “E-commerce Gateway to China” event in Athens and were informed in detail about the opportunities of cooperation with the Chinese e-commerce giant.

During the event, attendees were informed on Alibaba’s Tmall Global shopping platform that includes international and native-branded products and is frequented by Chinese consumers. The platform already includes 13 Greek-based brands such as Folie Folie.

Alibaba representatives also presented the Alitrip online travel and tourism platform as an opportunity for Greek tourism enterprises to enter the Chinese market and the Alipay payment app that has launched in Europe and allows Chinese tourists to pay for purchases abroad.

Following the event, B2B meetings took place between some 100 Greek trade and tourism professionals and members of Alibaba.

According to the Athens Chamber of Tradesmen, the “E-commerce Gateway to China” event was a big success that already opened the door to new partnerships.

Following the two-day event, the Region of Crete is expected very soon to partner with the Alibaba platform to promote Cretan products in China and attract Chinese tourists to the island.

The Athens Traders Association will cooperate with Alitrip and Alipay in order to interconnect its own innovative platform that registers shops, restaurants and places of tourism interest. The association aims to facilitate Chinese visitors when they are looking for shops and other services via mobile in Greece and but also to provide valuable information about the country. One of China’s biggest payment services, the Alipay app recognizes where the Chinese user is in Europe and sends notifications about where to eat, shopping offers and places to see.

The Hellenic Post Office will open an e-shop on Alibaba’s Tmall platform for Chinese consumers and also develop a support strategy to assist Greek SMEs that want to export small quantities of products to China.

In addition, the Greek e-commerce business association GRECA will now be in direct contact with the Chinese company to explore how exactly Greek electronic platforms can interconnect with Alibaba.

“This is only a small sample of the possibilities now available to Greek companies, thanks to the communication channel we opened with Alibaba”, the president of the Athens Chamber of Tradesmen, Ioannis Chatzitheodosiou, said.

“It is certain that in the near future there will be many significant synergies with a view to boost the Greek economy.”