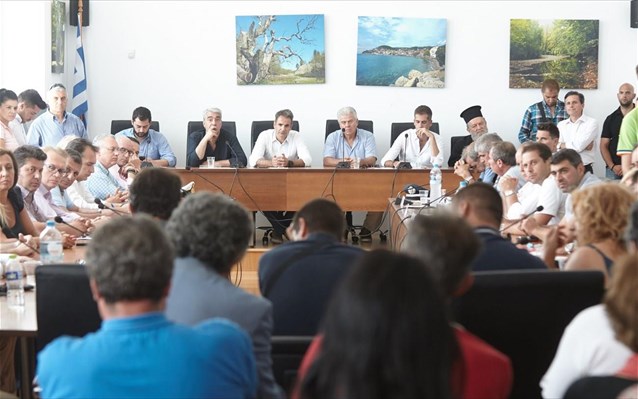 The Prefect of Central Greece Kostas Bakoyannis on Wednesday announced measures to support tourism in the area of Limni in northern Evia after firefighters managed the day before to bring under control a large wildfire that had raged near the seaside village for three days.

During a meeting attended by New Democracy leader Kyriakos Mitsotakis and local authorities, Mr Bakoyannis referred to measures for the promotion of Limni to support the current tourism season which has been upset due to the wildfire.

According to reports, the news of the fire brought a wave of hotel cancellations in the area.

During the meeting, Mr. Bakoyannis stressed the need for immediate relief of those affected, especially the resin-collectors. He further noted that a study must be carried out before autumn, in cooperation with the Forest Service, for the flood protection in residential areas.

Also at the meeting was Evia MP of the New Democracy party Simos Kedikoglou who underlined the need to support the seaside village of Limni with immediate and long-term measures.

“Limni is still beautiful and we can help the area not only stand on its feet, but also to develop”, Mr Kedikoglou noted.

According to Greek daily Kathimerini, the initial estimates of the damage wreaked by the fire put losses at around 3,000 hectares of land.