Stournaras: Tourism, Reforms, Key to Bringing Greece Out of the Tunnel

Tourism, reforms and privatizations are key to bringing Greece back into the game, Greek Central Bank Governor Yannis Stournaras said last week, expressing his optimism that faith is being restored in the Greek economy.

According to To Vima on Sunday, Mr Stournaras is placing his bets for Greece’s economic viability on tourism, adding that despite June’s “sluggish” tourism traffic – due to losses recorded on the Aegean islands bearing the brunt of the refugee crisis – July and August have seen figures pick up pace thanks to last-minute bookings. 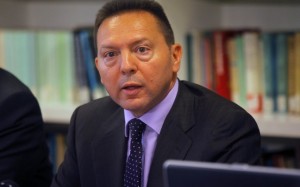 The Central Bank Governor was quick to point out that it is vital all reforms agreed on with Greece’s international lenders be promptly implemented and privatizations be completed on time.

“If we want to move away from austerity, namely less austerity, privatizations and reforms agreed on with lenders must move ahead,” Mr Stournaras said.

The Central Bank governor estimated that Greece has “overcome the financial hurdle for 2016, with the Bank of Greece forecasting that the year will end with a primary surplus of 1.3 percent of GDP against a target of 0.5 percent of GDP”.