Greece’s New Vergina Museum in Macedonia to Open in 2017 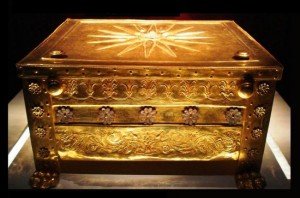 The new Museum of Vergina in Macedonia is scheduled to open its doors to the public in 2017 with “Aigai: The first city of the Macedonians, from Hercules to Alexander the Great – In Memory of Aigai” after gaining access to EU funding.

Under National Strategic Reference Framework (NSRF, known as ESPA in Greece) funding, the museum, which includes indoor and outdoor areas, patios, an amphitheater, a multipurpose space, training and scientific departments, maintenance sections, public service areas and administration offices, will exhibit findings from Aigai, the first capital of Macedonia, where in 336 BC Philip II was assassinated and Alexander the Great was proclaimed king.

An UNESCO World Heritage Site, Aigai is considered “an exceptional testimony to a significant development in European civilization, at the transition from classical city-state to the imperial structure of the Hellenistic and Roman periods”.

Central Macedonia prefect Apostolos Tzitzikostas signed the NSRF agreement, which will cover the second phase of the museum’s construction budgeted at 4,432,935 euros.