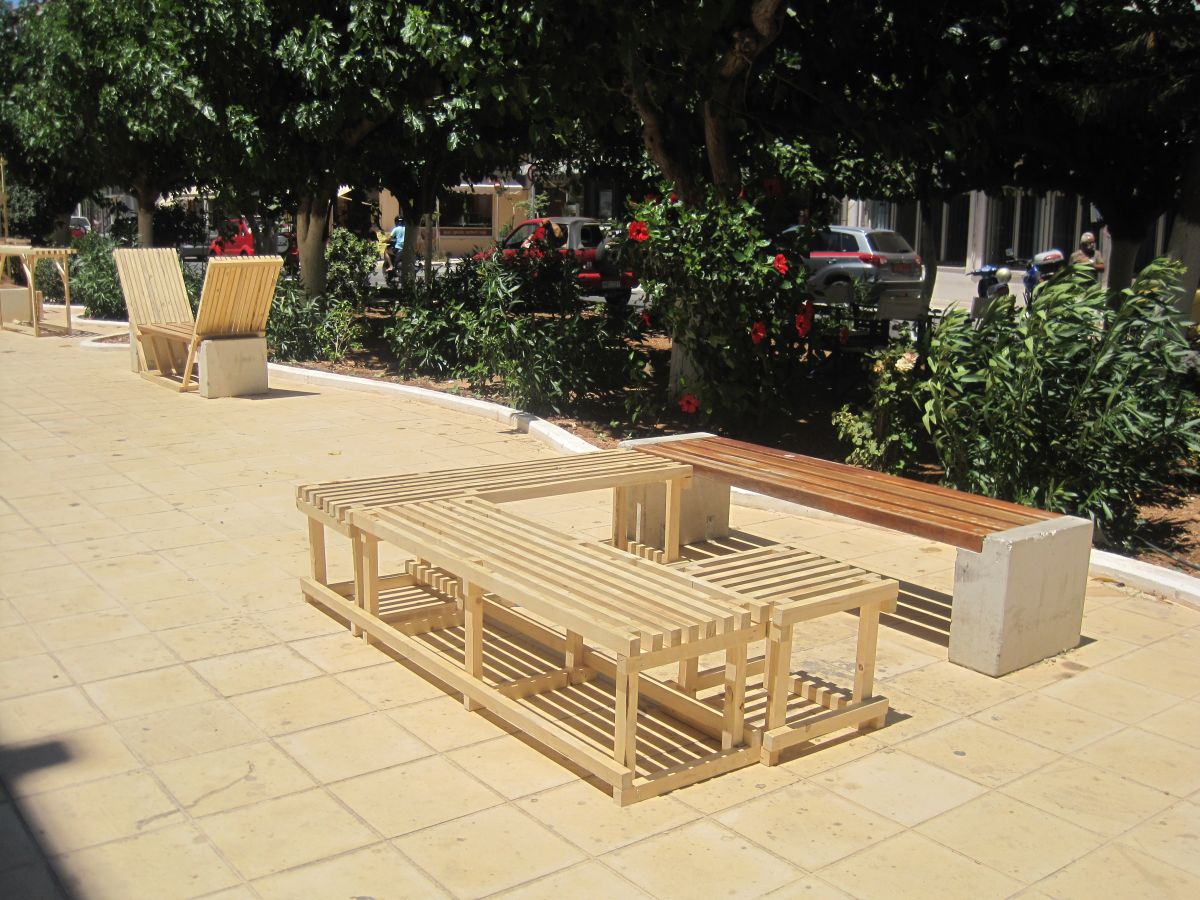 The Municipality of Agios Nikolaos in Crete marked the beginning of this year’s tourist season with an environmental message.

During July 4-9, the city of Agios Nikolaos hosted the international conference and sustainable design workshops of ECOWEEK, which offered a series of presentations and discussions around the theme of sustainable design, public activity, environmental awareness, and hands-on interventions in public spaces and public schools.

Italian Architects Nasrin Mohiti Asli and Margherita Manfra of Orizzontale led ECOWEEK workshop W1 with a project that focused on the Municipal Park (Parko Dimarxeiou) adjacent to the Municipality. Their aim was to activate public space, giving an identity to the Municipal park, so that the local community can use the park in a different way.

To formulate their design approach, the team worked closely with the local community, aiming to identify their needs and how an underused space in the center of town, despite being adjacent to local stores, coffee shops, residential and office buildings, and a hotel, could become an integral space for life in the city.

Orizzontale is an award-winning architecture collective based in Roma whose primary interest are reactivation processes involving urban scrap. Intercepting places, ideas and things rejected from metropolitan (re)productive cycle, Orizzontale activates collaborative “public acts” in the form of semi-permanent architecture or installations, in which material and immaterial wastes mutually restore each other’s meaning.

Asli’s and Manfra’s previous participation in ECOWEEK was in Rome in 2012, where they co-led an intervention in the urban park Valle Aurelia in Rome, Italy. 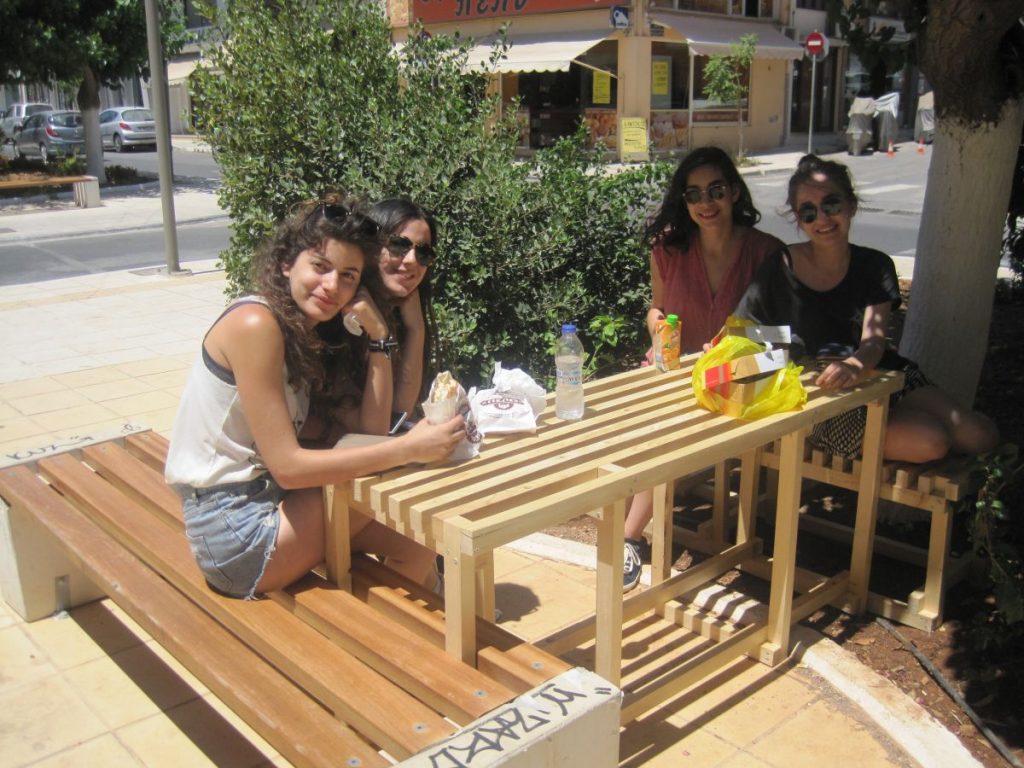 Orizzontale since 2010 has been promoting do-it-yourself projects of common relational spaces, giving form to both dismissed and unseen images of the city. These projects have represented the ground for experimenting new kinds of interactions between city dwellers and urban commons as well as occasions to test the boundaries of architectural creation process.
“8 ½”, the mobile theatre designed by orizzontale in 2014, was awarded the international prize of Young Architects Program by MAXXI Museum and MoMA; in 2015 the project “Spin-off” won the competition for the setting of the Steirischer Herbst festival centre in Graz.

ECOWEEK 2016 brought us to Agios Nikolaos. We have already been involved with ECOWEEK 2012 in Rome, together with OSA – Architettura e Paesaggio and LUS – Living Urban Scape, to develop a workshop with twenty foreign students. The site of intervention was in the neighborhood of Valle Aurelia, specifically the garden Giardino del Maresciallo. After working around the theme of the obstacle (material and immaterial), we decided to create a new temporary entrance to the garden: UP is a staircase made entirely with recycled material, mostly expositive panels (wood and mdf), located along via di Valle Aurelia where the sidewalk, bordered by a high brick wall, is interrupted. In the place where this fracture is usually perceived as a discontinuity, UP solves the difference in height of about three meters and invites one to go beyond, to look over the wall.

We worked on a public site, Dimarxeiou Municipal Park, focusing on the construction of a DIY relational device to investigate possible interactions between city dwellers and urban common spaces. Since most of these projects are mobile and temporary, the use of recycled material becomes important in terms of environmental and economic sustainability. It also stimulates creativity and reduces standardization, imposing a particular substance and resiliency components to the design process. 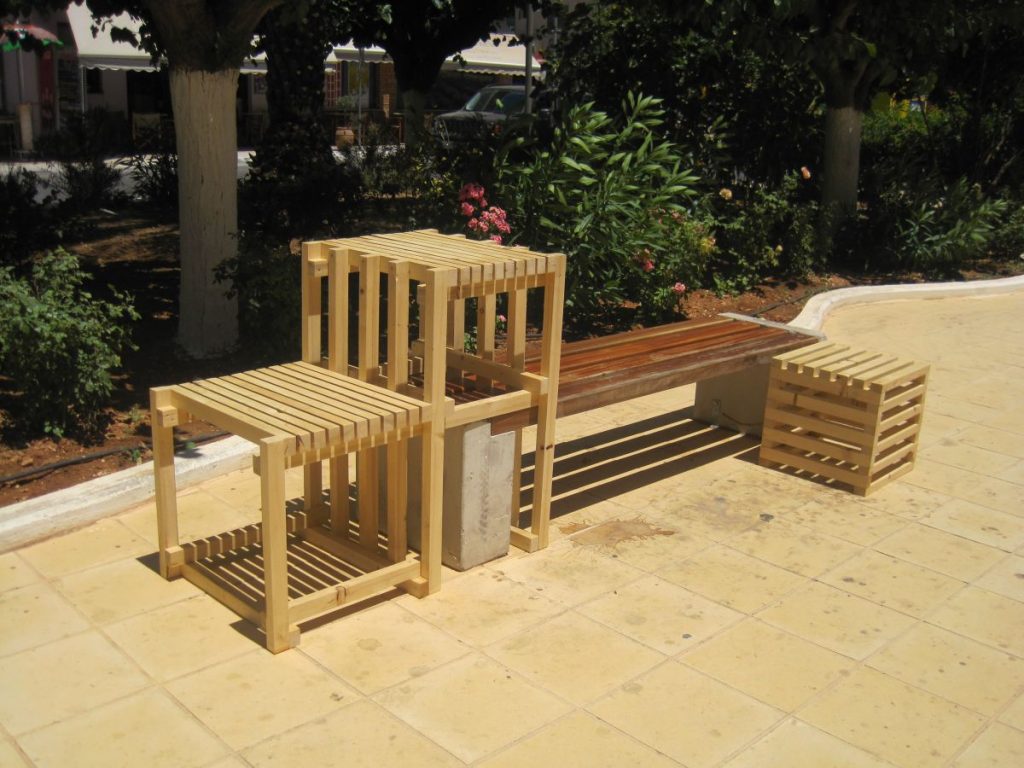 We had never been to Agios Nikolaos. We tried to show and teach our practice, consisting in operating in common grounds using open building processes as a tool. These ephemeral projects represents one of the strategy to mold urban landscapes.

Working with communities needs several steps and longer term processes; in this case we’ll investigate people reactions “launching a probe” in public space. If the neighbors will feel involved, it will demonstrates that the method is appropriate and can evolve.

ECOWEEK, an event taking place in more than 15 countries around the world since 2008, was held by the Municipality of Agios Nikolaos in collaboration with NGO ECOWEEK, the G & A Mamidakis Foundation, bluegr Hotels & Resorts, and the Region of Lasithi.

The event hosted experts from Greece and abroad — Canada, Italy, UK, Israel, and Turkey — and students of architecture and engineering from academic institutions in Greece, Turkey and the US.

ECOWEEK in Agios Nikolaos is the first of a series of similar events to take place this year in Romania, Kosovo, Israel and Thessaloniki, Greece. For next year, ECOWEEK is in the planning – among others — in the UK, Holland and Singapore.

Nafpaktia to Promote Alternative Side at Tourism Expo in October