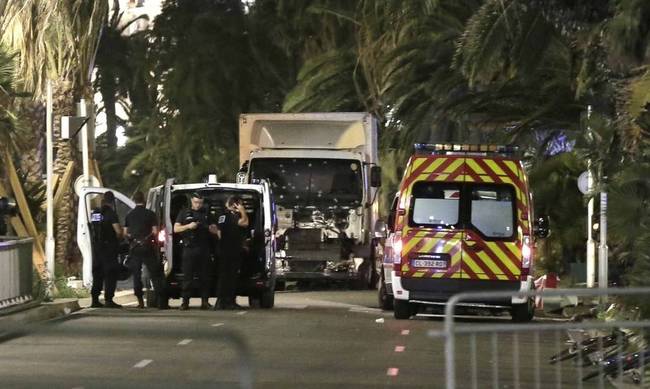 A wave of international condemnation followed Thursday’s attack in Nice, France, that left at least 84 people dead, 18 in critical condition and injured many.

On Thursday night, a man deliberately drove a cargo truck into a crowd of people celebrating Bastille Day on the Promenade des Anglais in Nice, an area popular with tourists in the Riviera resort. The killer was a 31-year-old French citizen born in Tunisia. Police shot and killed the driver and found firearms, explosives and grenades in the truck.

French Prime Minister Manuel Valls tweeted: “The city of Nice has been hit by terrorism on the day of our national holiday. Immense pain, the country is in mourning. The French will face it.”

President Francois Hollande said the truck attack in Nice was of a “terrorist character” and extended the national state of emergency by three months.

France remains under a state of emergency that was put into place after a series of terrorist attacks in Paris in November.

A few hours after the massacre, Europe and the US warned that the attack on the day of a national holiday is an attack not only against the people of France, but against the entire free world.

US President Barack Obama condemned the attack and offered any assistance that France may need to investigate this attack. “On behalf of the American people, I condemn in the strongest terms what appears to be a horrific terrorist attack in Nice, France, which killed and wounded dozens of innocent civilians.”

UK Foreign Secretary Boris Johnson wrote on Twitter to be “shocked and saddened by the appalling events in Nice, and the terrible loss of life.”

The British Foreign Office issued a travel advisory stating: “We are in touch with the local authorities and seeking more information following an apparent attack on Bastille Day celebration in Nice. If you are in the area follow the instructions of the French authorities who are at present advising people to stay indoors at this time.”

At a ASEM summit in Ulaanbaatar, Mongolia, European and Asian leaders held a minutes silence.

The ASEM leaders said they condemn “terrorism in all its forms and manifestations committed by whomever, wherever and for whatever purposes.”

In a statement, the leaders expressed their deep sympathy and condolences to the families of the victims, to the people and to the governments of various countries which have suffered from terrorist attacks resulting in the loss of innocent lives.

“We reaffirm our commitment to join forces to fight the plague of terrorism and underline the need to bring to justice those responsible for the attacks in accordance with the Charter of the United Nations and other obligations under international law”, the statement read.

From the ASEM summit, European Council President Donald Tusk said that European and Asian leaders pay respect to victims of Nice attack. “We stand united against violence and hatred”, he tweeted.

German chancellor Angela Merkel said she is shocked by “mass murder in Nice”. “All of us who have come together at the ASEM summit are united in our feeling of disbelief at the attack of mass murder in Nice. Germany stands in the fight against terrorism at France’s side, united with many, many others. I am convinced that, despite all the difficulties, we shall win this fight”, the German chancellor said on the sidelines of the ASEM summit.