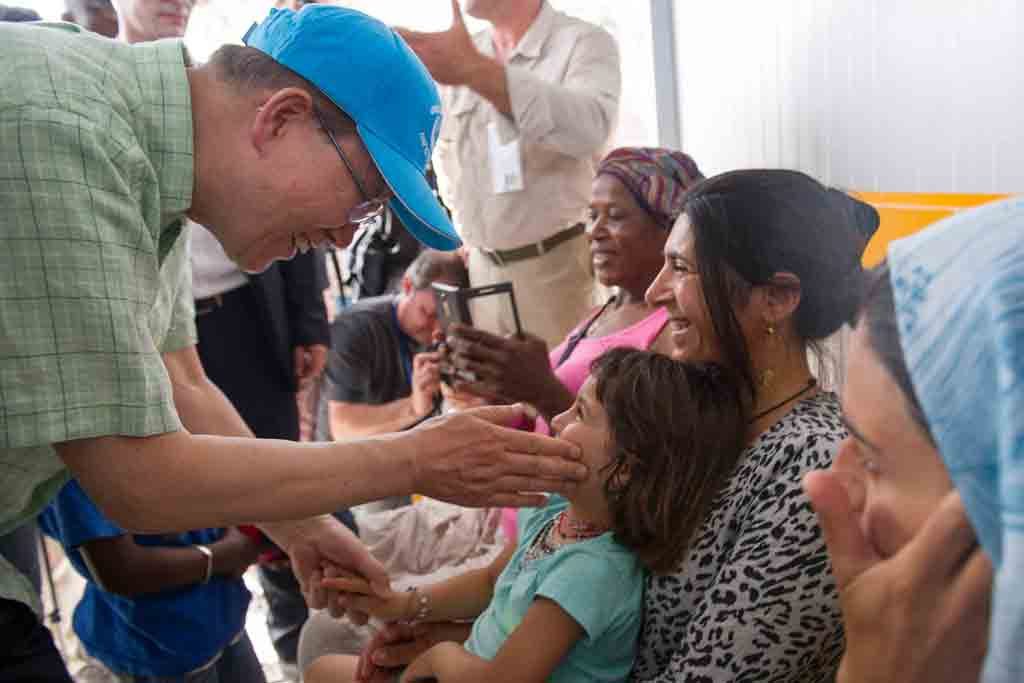 Visiting the Greek island of Lesvos, which has become migrants’ entry point to Europe, United Nations Secretary-General Ban Ki-moon on Saturday called on the countries in the region to respond with a humane and human rights-based approach, instead of border closures, barriers and bigotry, the UN News Centre said in an announcement.

“Today, I met refugees from some of the world’s most troubled places. They have lived through a nightmare. And that nightmare is not over,” Mr. Ban told non-governmental organizations (NGOs), volunteers and media, who gathered to hear the UN chief’s firsthand account of the situation there.

“But here in Lesvos, they have found relief from war and persecution,” he added, noting that the islanders opened their homes, hearts and wallets to support people in need.

Underlining that every month, 450 people lose their lives in the Mediterranean, the equivalent of two full transcontinental passenger jets, Mr. Ban urged the international community to do more to resolve conflicts and address the factors causing so much suffering and upheaval, and called on the countries of Europe to respond with a humane and human rights-based approach.

“Detention is not the answer,” he said. “It should end immediately. Let us work together to resettle more people, provide legal pathways, and better integrate refugees.”

Mr. Ban stressed that developing countries host 90 percent of the world’s refugees. It is time for the world to share fully in this responsibility.

“That is our political and moral obligation… One of the most beautiful words in the Greek lexicon is philoxenia — friendship towards strangers,” he concluded.

Earlier, while in Athens, Mr Ban met with Greece’s Prime Minister Alexis Tsipras and discussed the refugee crisis, urging States to address the root causes of displacement and more evenly share the responsibility for the welfare of migrants and refugees.

During a joint press conference with PM Tsipras, the UN chief acknowledged Greece’s important contributions to the United Nations across the international agenda, and thanked the people of Greece for their global citizenship.

“Despite the country’s own economic troubles, Greece has been generous in saving lives,” he said. “Greece should not be left to address this challenge on its own…  I continue to call for greater sharing of this responsibility across Europe and, indeed, across the world,” he added.

On his part, the Greek PM stressed that the role of the UN is crucial to defend and ensure peace and stability.

“This past year my country went through an unexpected humanitarian crisis because of refugee flows. I myself, the Government, the State and the people feel proud that the Greeks faced the refugees with solidarity and compassion”, he said.

PM Tsipras also referred to the EU-Turkey agreement, thanks to which refugee flows have dropped and the fatalities in the Aegean Sea have stopped.

Mr. Ban and the Prime Minister also discussed the conflict in Syria, recent terrorist attacks and other challenges that are causing large-scale suffering and instability, as well as the Middle East peace process.

Other issued touched included the Greek Cypriot and Turkish Cypriot talks and the 2030 Agenda for Sustainable Development and the climate change challenge.

The UN chief arrived in Greece on Friday and met with President Prokopis Pavlopoulos.

Mr. Ban’s two-day visit to Greece came just ahead of World Refugee Day on June 20, and in the runup to the UN General Assembly’s High-Level Meeting to address the large movements of refugees and migrants, on September 19.

Ahead of World Refugee Day, the Office of the UN High Commissioner for Refugees (UNHCR) has recently launched the #WithRefugees petition, which aims to gather public support for the growing number of families forced to flee conflict and persecution worldwide.

Katseli: Greece could Lift Capital Controls by End of the Year