United Nations (UN) Secretary-General Ban Ki-moon will visit the island of Lesvos in Greece next week to assess the refugee situation and to show his solidarity. 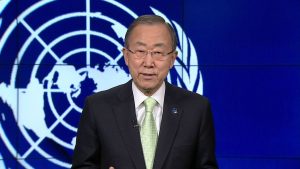 His trip to Lesvos is as part of a European tour that includes previous stops in Brussels, Moscow, Saint Petersburg and Athens.

According to an announcement from his office,  the Secretary-General will travel to Athens, Greece, on June 17 where he will meet with President Prokopis Pavlopoulos and Prime Minister Alexis Tsipras, among others.

He will then go to the island of Lesvos, on Saturday, June 18, to meet with refugees, migrants and asylum seekers, as well as local volunteers and authorities.

Speaking to reporters on Thursday, Ban Ki-moon said that he will visit the Greek island of Lesvos “to assess the situation and to show my solidarity.

“Hundreds of Syrians and other refugees and migrants continue to die in the Mediterranean while making perilous journeys out of war and persecution,” he said.

The total number of refugees in Greece is 57,458, according to government figures made public on Tuesday.