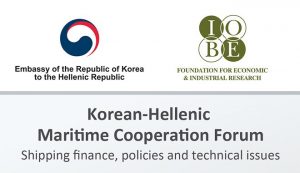 The current state and the prospects of the shipping industry, the latest technological advances in the shipbuilding sector and the opportunities for commercial and financial cooperation between Greece and Korea in the maritime sector were among the main topics discussed at the 2016 Korean-Hellenic Maritime Cooperation Forum that took place at the Sofitel Athens Airport hotel in Athens on Wednesday.

Held on the sidelines of the Posidonia 2016 International Shipping Exhibition running this week, the forum was organized by the Embassy of the Republic of Korea in Greece and the Foundation for Economic and Industrial Research (IOBE).

“The Hellenic Republic and the Republic of Korea have long recognized each others contributions in the maritime industry, and both have been working hard to further develop a mutually beneficial relationship in a wide range of areas in their respective shipping and shipbuilding industries”, the Ambassador of the Republic of Korea Young-jip Ahn said at the event’s launch.

The ambassador highlighted the great challenges the maritime sector is facing internationally due to the global financial downturn, the leading role of Korea in the global shipbuilding sector, the traditionally powerful position of Greece in shipping and the mutually beneficial complimentary cooperation between the two countries. 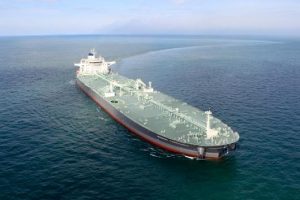 On his part, the Greek Minister of Maritime Affairs and Insular Policy Thodoris Dritsas said that the Memorandum of Understanding signed in 2014 between Greece and Korea on cooperation in the field of maritime technology could become the driving force for stronger ties between Greek marine equipment companies and Korean shipyards.

During his speech, Mr Dritsas highlighted the strong bond between the two countries, noting that Korean shipyards have always been the first choice of Greek ships.

“In 2015, despite the global economic crisis and low freight rates in certain areas of shipping, the orders of Greek shipowners in Korean shipyards accounted for 171 new ships, a capacity of some 21 million DWT”, Minister Dritsas said.

The minister added that the bilateral cooperation of the two countries could be further expanded in other areas of maritime relations, such as in the port sector and the supply chain.

Moreover, Mr Dritsas stressed that despite difficulties, Greek shipping managed to maintain its lead in the world, providing high quality maritime transport services, with a significantly renewed fleet that operates with the most contemporary methods and practices.

On his part, IOBE’s chairman, Takis Athanasopoulos, focused on the maritime cooperation between Greece and Korea and underlined that the sea has a special significance for both nations.

“Today, the maritime sector is a core element of the economy and the social life of both Korea and Greece”, he said, adding that Greece continues to be the largest ship-owning country worldwide, accounting for 15 to 20 percent of the world fleet in the past few years.

“Ocean-going shipping is a major exporter of services for the Greek economy, with a very significant contribution to the balance of payments of Greece”, he said.

Mr. Athanasopoulos also underlined that many obstacles such as the tight credit conditions that prevail in the country create a significant barrier to the proper functioning of the maritime ecosystem in Greece today.

“Stronger links with Korea can help us overcome obstacles”, he said.

Moreover, the importance of strengthening Korea’s investment presence in Greece was stressed by the Deputy Minister of Foreign Affairs Dimitris Mardas.

He announced that a Greek delegation will attend a business forum in Seoul during the fourth quarter of 2016.