Hellinikon Upgrade Project on its Way to Becoming a Reality

A Memorandum of Understanding (MoU) was signed on Tuesday between the Hellenic Republic Asset Development Fund (TAIPED) and Lamda Development, which amends the existing share sale and purchase agreement (November 2014) of the Hellinikon former airport.

According to an announcement by Lamda Development, important technical features of the Hellinikon former airport’s redevelopment are delimited through the MoU, so that the project is fully aligned with the expectations of the citizens, the local communities and the wider region of metropolitan Athens.

“Today’s agreement, which specifies all the basic design requirements and economic parameters of the project, is a milestone because it provides the opportunity to accelerate all procedures for commencing the project that will become the largest urban regeneration throughout Europe for the coming years”, Lamda Development said in the announcement.

According to reports, the signing of the MoU paves the way for certain contentious issues of the agreement to be settled. The agreement is expected to be ratified by parliament in autumn.

Once completed, the Hellinikon project is expected to have a positive impact on Greek tourism with an additional increase of one million tourists per annum.

The basic design of the project includes the upgrading of the beach, residential developments, superregional and local commerce, hotel facilities and recreational areas, utilization of the Olympic facilities and the creation of new sports facilities, a new golf course, venues that highlight Greece’s cultural heritage, educational facilities and research centers etc.

Moreover, within the project’s framework the investors undertake the creation, financing and maintenance of the largest Greek — and one of the largest in the world — Metropolitan Green and Recreational Park, which jointly with the public use green areas of the site will cover and aggregate area of 2.600.000m2 or 42 percent of the entire site.

The will undertake the financing and construction of all transport infrastructure, public facilities and utilities networks, all necessary port works, the creation of 50klm of sidewalks and bicycle paths which will create the necessary connection with the existing and the new rail networks, the underground routing of parts of Posidonos Avenue, the renovation and operation of all listed buildings within the site, as well as the creation of a 1 kilometer beach with free-access to the public.

“This is an important step towards the direction of investment, employment, exploitation of new opportunities and of attracting international capital in the country”, Lamda Development’s president, Tassos Giannitsis, and CEO, Odisseas Athanasiou, said in a joint statement welcoming the agreement. 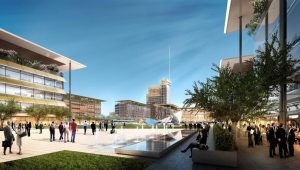 “The project will have multiple positive effects on other sectors and activities, it will create new expertise and a very large area will gain immense utility value for millions of Greek and foreign citizens”, they underlined.

“Most importantly, this investment due to its size and qualitative characteristics, will install an important development axis in the economy of the country, and especially that of the Attica basin, which will become a reference point for many decades”, Mr Giannitsis and Mr Athanasiou said.

According to the company, the development on Hellinikon is expected to create 10,000 direct jobs and boost the construction sector, which has been severely struck during the years of the prolonged economic crisis. At full development the Hellinikon project is expected to employ approximately 70,000 people.