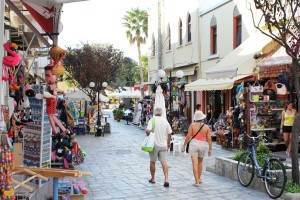 The ongoing economic crisis in Greece has led to the decline of business activity in terms of figures and growth, business services group ICAP found in a report released on Wednesday.

According to the report, only two sectors — tourism and service — have demonstrated resilience in terms of gross profit margin in 2014 compared to pre-crisis 2008. ICAP cites adaptability to the new conditions as reason for these sectors’ competitiveness in the given economic climate.

Examining the 2008-2014 period, the ICAP study looked at the evolution of company size and results in all sectors (through their published balance sheets) in order to give an overall picture of the course of Greek enterprises during the crisis as this is reflected in the losses suffered.

With regards to tourism, 2014 marked the end of a downward spiral since 2009. Indicatively, total sales dropped by an average annual rate of 2.1 percent in 2008-2014, standing at 5.4 billion euros in 2014, the year the sector returned to profitability, with record profit before tax at 207 million euros. In the meantime, gross profit margin improved from 22.26 percent in 2008 to 25.91 percent in 2014, due to cost cuts. In terms of net income, the tourism sector benefited significantly thanks to robust growth in tourist arrivals.

Sectors suffering the greatest blow in terms of accumulated losses were service and industry.