Hotels in Athens saw no increase in occupancy in the first quarter of the year despite a growth of 6.1 percent in arrivals to the Greek capital during the same period, the Athens-Attica & Argosaronic Hotel Association said on Thursday.

According to data released by the association, the difference in hotel occupancy compared with the same period last year is 0.0 percent, while the variation in the average room rates (ARR) and revenue per available room (revPAR) are fixed from April to the rates of 0.0 percent and -0.3 percent respectively.

The association said that by looking at the data it is once again proven that visitors have been lost to unlicensed and untaxed “tourism” accommodation lodges (short-term home rentals), pointing out that the “gap” among tourist arrivals at Athens airport and occupancy in hotels is increasing. 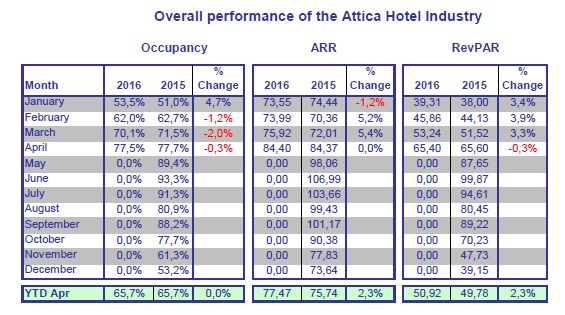 Weighted on rooms available in Attica hotels of 5* – 3*, excluding the islands and Piraeus. Source: GBR Consulting

According to a study carried out by Grant Thornton for the Hellenic Chamber of Hotels in October 2015, in just one year, the Greek state has lost 350 million euros in taxes.

The association underlined that the hospitality sector is still waiting for the creation and immediate application of a new stricter operational and taxation framework for short-term home rentals, as announced last year by the Minister of Economy, Development and Tourism Yiorgos Stathakis and Alternate Tourism Minister Elena Kountoura.

“Instead, it was decided for hoteliers to be taxed again, with an additional ENFIA tax“, the association stressed, also referring to other charges such as the so-called “occupancy tax” to take effect in 2018, a number of indirect levies as well as to the hike in value-added tax (VAT) — charges that put a heavy burden on hotels.

The association called on the government to scrap the additional ENFIA tax and collect revenue from activities that have been “defiantly left intact and are a source of tax evasion”.