The new routes are part of the Lufthansa Group Airlines 2016 summer schedule announced in early April.

On Saturday, May 14, Lufthansa launched the new Santorini – Munich direct route which will run once a week, every Saturday. 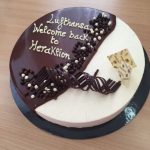 Τhe airline also relaunched the direct connection between Heraklion, Crete, and Munich for the second consecutive year. According to statements of Lufthansa’s representatives, last year’s increased demand led to the decision to relaunch the route and increase the frequency of flights this season. The direct Lufthansa flights connecting Heraklion to Munich will take place twice a week, every Saturday and Sunday.

On Sunday, May 15, Lufthansa launched the new Corfu – Munich route, which will operate once a week, every Sunday.

Munich Airport, a Lufthansa hub, is among the most modern and award-winning airports in the world. In late April the new Satellite Terminal, an extension of Terminal 2, was launched at Munich Airport. The new satellite building, which includes a roof terrace, panorama windows and a bar with a view of the airfield, allows travellers to have access to a total of five new lounges with a total area of over 4,000 square metres.