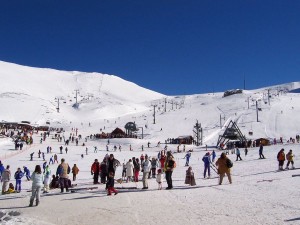 The Parnassos Ski Center will benefit from the Juncker Plan.

Tourism is among the first sectors in Greece to receive EU funding to the tune of 112 million euros for three projects in addition to a fourth included in the infrastructure transport sector, under the EU Infrastructure Investment Plan.

As part of the so-called Juncker Plan — initiated by European Commission President Jean-Claude Juncker in 2014 with the aim to kick-start EU growth — Greece will direct financial backing to the protection, modernization and development of the Caiphas thermal baths in the Ilia prefecture, the upgrade of the Parnassos Ski Center and the conversion of the former Tae Kwon Do Hall on the Attica coastline into a congress center.

Additionally, as part of the infrastructure category projects totaling 1.445 billion euros, support will go towards setting up a cross-country waterways network for seaplane transport, the construction of two intercity bus terminals in Eleonas and Egaleo, the modernization and upgrade of the rail/road networks to the port of Lavrion, an underwater tunnel connecting Attica with Salamina island and the extension of the Hymettus-Vouliagmeni road link.

Speaking at a day event titled “European Financial Tools – Development Opportunities for Crete” in Chania last week, the minister said the funding “focuses on the productive conversion of the economy and on the development of the country’s human resources, particularly those in fields of science”.

He added that the government is set to announce additional funding opportunities for SMEs in the coming months.