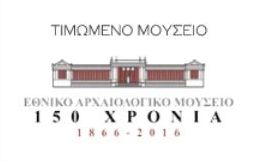 The National Archaeological Museum, which this year celebrates its 150th anniversary, is being honored for its contribution to culture and the nationwide character of its collections, representing universal values.

As the “museum of honor” for 2016, the National Archaeological Museum will host a series of events from May 16 until May 22. The opening event will be held on May 18 at the museum at 7pm and includes a music concert. The events can be found here (in Greek).

The National Archaeological Museum is the largest museum in Greece and one of the world’s great museums. Although its original purpose was to secure all the finds from the nineteenth century excavations in and around Athens, it gradually became the central National Archaeological Museum and was enriched with finds from all over Greece. Its abundant collections, with more than 11,000 exhibits, provide a panorama of Greek civilization from the beginnings of Prehistory to Late Antiquity.

The theme of International Museum Day 2016 will be “Museums and Cultural Landscapes”, which is also the theme of the General Conference of the International Council of Museums (ICOM), to be held in Milan, Italy from 3 to 9 July. This theme implies that museums have a certain responsibility towards the landscapes where they are located, to which they are able to bring their own specific knowledge and skills.

The objective of International Museum Day is to raise awareness of the fact that, “Museums are an important means of cultural exchange, enrichment of cultures and development of mutual understanding, cooperation and peace among peoples.”

Organised on and around May 18 each year, the events and activities planned to celebrate International Museum Day can last a day, a weekend or a whole week.

To see the full program of events taking place in Greece, press here.

Participation in International Museum Day is growing among museums all over the world. In 2015, more than 35,000 museums participated in the event in some 145 countries.

The International Council of Museums (ICOM) established International Museum Day in 1977 to increase public awareness of the role of museums in the development of society.