Greece may be showing impressively growing numbers of incoming tourists but Greek hotels don’t seem to be the ones cashing in on the good news, according to the latest report released by Gbr Consulting for the first quarter of the year.

The findings indicate that though the numbers of visitors are increasing, there is a failure to identify where they are staying, and all this while Berlin authorities passed a new law last week aiming to crack down on Airbnb and its rivals with fines for users who rent out entire properties rather than single rooms of up to 100,000 euros. And while locals have been advised to anonymously report any suspected lawbreakers, Airbnb listings in Berlin have reportedly dwindled by 40 percent. Rival website Wimdu has filed a lawsuit claiming the regulations breach the constitution of Berlin. 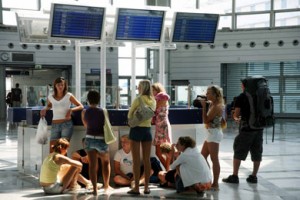 Meanwhile in Greece, tourism sector professionals are ringing alarm bells as  they attribute the growing number of “elusive” visitors – markedly higher in Athens – to the “shadow” operation of the sharing economy, estimated at having cost the Greek government more than 400 million euros in 2015.

According to the data, the number of incoming travelers going through Athens International Airport grew by 10.1 percent but hotels only saw a 3.5 percent increase in revenue per available room. At the same time, between September 2015 and March 2016, the number of tourists grew but hotel revenue dropped.

San Francisco-based Airbnb has listings in over 34,000 cities and 191 countries.