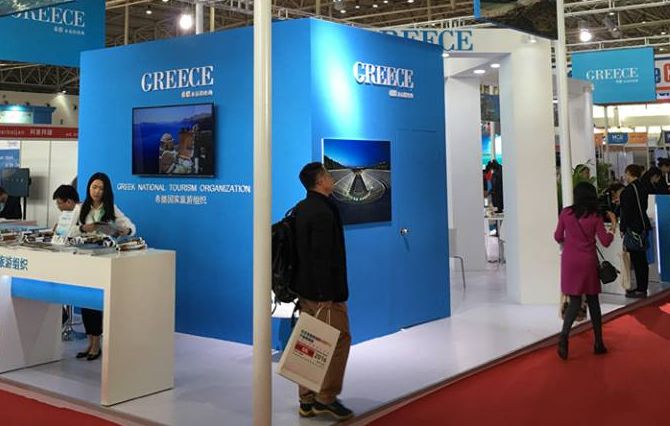 By opening more visa application centers, Greece responded to the policy announced in October that requires Chinese citizens to submit biometric data to get a Schengen visa. Currently, 12 Greek visa centers are operating in the cities Xi’an, Chongqing, Hangzhou, Shenyang, Wuhan, Changsha, Chengdu, Shenzhen, Jinan, Nanjing, Fuzhou and Kunming. By the end of April another two centers are expected to open. Greece already has visa application centers in Beijing, Shanghai and Guanghzou.

Argo Travel was one of the Greek companies to participate in the GNTO stand at COTTM 2016.

GEPOET took part in COTTM as a coexhibitor in the stand of the Greek National Tourism Organization (GNTO), which made its debut in participating in an exclusively b2b expo in China.

During the COTTM expo, the GNTO office in China printed and distributed two high quality brochures that highlighted both the Dodecanese and the Ionian islands, aiming to introduce additional destinations to the Chinese travel professionals.

Greece should promote its beauty via film productions

During the B2B expo, Zakynthos was one of the most asked about destinations by Chinese tour operators. The island this year is expected to attract many Chinese tourists as it has received much promotion in the South Korean TV series “Descendants of the Sun”, which has been playing in China since February.

According to GEPOET, Greece should opt for attracting more TV and film productions from Asia, as this may prove one of the best means to approach the specific market.

In 2014, the “Beijing Love Story” production contributed significantly to the increase of Chinese tourists on Santorini.

“GEPOET strongly supports the adoption of a national strategy in this area, which will directly bring positive results for Greek tourism”, the federation said in an announcement.