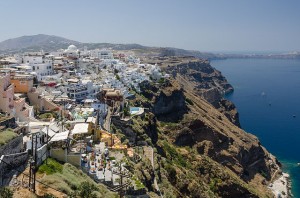 It᾽s no secret that Santorini is the place to see and be seen, and given Tuesday’s Tripadvisor ranking naming the Greek island as the best in Europe and second best in the world, it’s no wonder investors are placing their bets there.

Chinese, Russian, British and German investors are putting their cash into hotels, retail and real-estate and rubbing their hands for the immediate returns.

Santorini has managed through the years to establish a strong brand name for itself, so much so that US investors are reportedly ready to invest 500,000 euros in the first McDonald’s in the Cyclades, in the island’s capital Fira.

The Chinese, in the meantime, eager to pledge eternal love with the legendary Santorini sunset as a backdrop are buying boutique hotels to bring in even more newly weds. According to reports, Chinese holding giant Anbang Insurance Group is currently negotiating the purchase of land to the tune of 10 million euros.