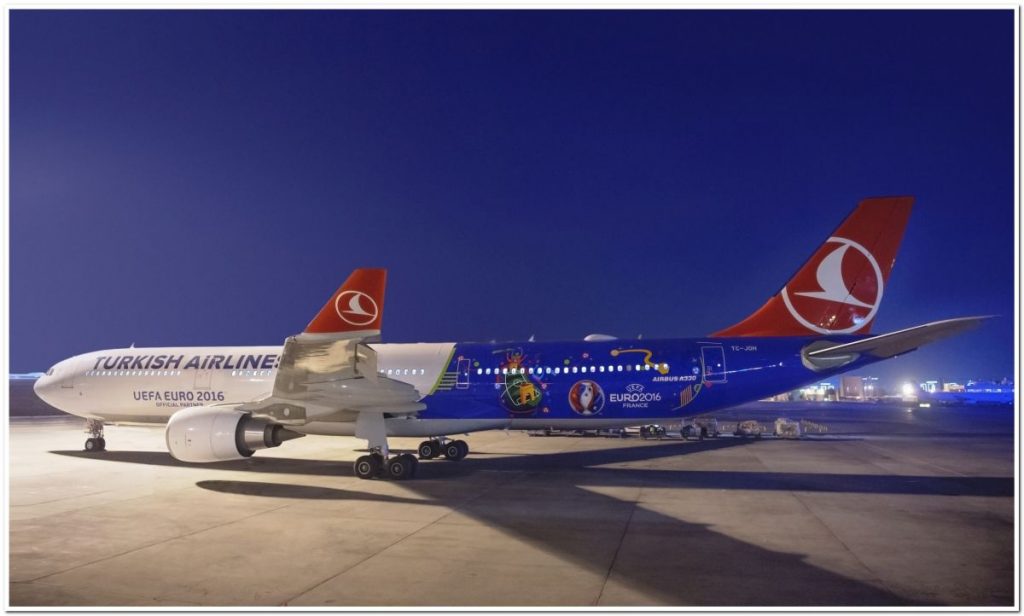 To celebrate UEFA EURO 2016 this summer, Turkish Airlines has unveiled an A330-300 passenger aircraft painted in the competition’s livery. The plane recently undertook its maiden flight to Paris, the location of this year’s final on July 10 and is just one component of Turkish Airlines’ drive to excite fans ahead of this year’s tournament.

The livery was created by UEFA and Turkish Airlines as part of the airline’s partnership with the competition and role as Official Airline Partner of Euro 2016.

“We are privileged to be able to connect people from across the globe every day, and are delighted to be part of this year’s EUROS. This plane is one of the many things we will be doing to excite fans and our passengers in the lead up to this competition”, Ahmet Olmuştur, Turkish Airlines’ Chief Marketing Officer (CMO) said.

The sponsorship will also see the airline announcing a series of ticket giveaway competitions; unique EURO 2016 airport experiences for passengers; and a series of Fan Zones throughout the host French cities once matches get underway in June.

“It will be fantastic to see the plane travelling across Europe, and bringing fans together to celebrate the best in European football, as we approach the kick-off of UEFA EURO 2016 on June 10”, Guy-Laurent Epstein, Marketing Director, UEFA Events SA, said.

The plane wrapped in the UEFA EURO 2016 colours will fly to a selected number of destinations across the Turkish Airlines’ network. The airline currently flies to more than 280 destinations. Fans of the plane and the competition can engage on social media with the hashtag #eurointhesky.

According to Skytrax survey of 2015, Turkish Airlines was chosen “Europe’s Best Airline” for the fifth and “Best Airline in Southern Europe” for the seventh consecutive year.

Alitalia Returns to China with Service to Beijing