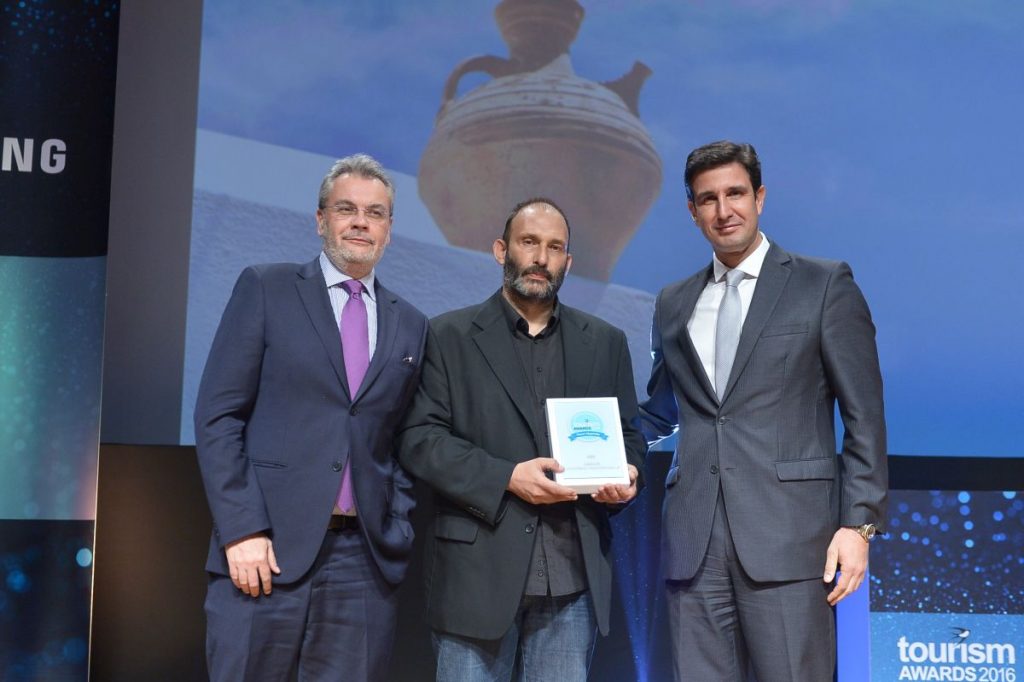 The president and founder of HotelBrain, Panos Paleologos (center), with the company’s CEO, Kostas Zikos (left) and the Secretary General of the Greek National Tourism Organization, Dimitris Tryfonopoulos.

Greek company HotelBrain received a Gold Award for hotel management at the Tourism Awards 2016 held on Wednesday, April 6, at the Megaron Athens Concert Hall. Eight distinctions were awarded to the hotels that HotelBrain has under its management.

In its third year, the third Tourism Awards rewarded the best practices of Greek companies and organizations in all sectors of travel, hospitality and leisure and applauded initiatives that encourage innovation and the quality of Greek tourism.

This is the second time HotelBrain received a gold award in the hotel management category of the Tourism Awards and the fourth consecutive distinction internationally over the last 12 months.

Overall, HotelBrain and the hotels under its management won a total of three gold, three silver and three bronze awards at the Tourism Awards 2016:

HotelBrain is the largest white flag hotel management company in Greece and in the Meditteranean in general. Founded in 2000 and initially based on the island of Santorini, HotelBrain has already taken over the hotel management of over 120 hotels located in Greece, Lebanon, Turkey and Cyprus. Serbia and Montenegro mark the fifth and sixth countries where the company expands its services.

The Tourism Awards 2016 were organized by the Hotel & Restaurant magazine of Boussias Communications and held under the auspices of the Ministry of Economy, Infrastructure, Shipping and Tourism and the Greek National Tourism Organization.