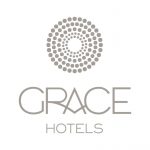 Having worked on the side of Michel Roux Jr. and Gordon Ramsay and gained experience in leading restaurants in Greece and abroad, Mr Agious has designed a sophisticated and robust menu for Grace Santorini that intelligently combines Mediterranean flavors and local ingredients and presents rich and delicious dishes.

“The local products of the Aegean with their distinctive flavors; the culinary history and tradition of the island; and the magnificent view from the Grace Santorini, are inspirations to me”, Mr Agious said.

“Both the Greek Kitchen award and the individual distinction for me as a young talented Chef, are of particular value for Grace Santorini and for me personally, and seal a tough team effort that aims for Grace’s guests to have unforgettable Greek culinary experiences”, he added.

A member of luxury boutique hotel group, Grace Hotels, the Grace Santorini is reopening for the summer season on May 2.