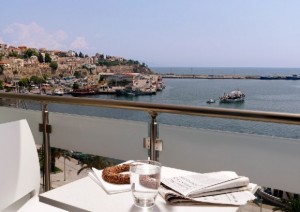 Greece’s hoteliers are up in arms over the government’s proposal to impose a new accommodation tax for each night spent in the country’s hotels.

The reform is included in a new package of proposals for measures, the Finance Ministry has sent to the country’s creditors in order to cover a fiscal gap of 5.4 billion euros.

The president of the Hellenic Chamber of Hotels, Yiorgos Tsakiris, said the proposal was “highly dangerous” and that any further burden to the competitiveness of the country’s tourism product  — after the tax increases — would be disastrous and would essentially negate the possibility of Greek tourism sustaining government revenues and providing jobs to Greeks.

“The Hellenic Chamber of Hotels has already taken all necessary actions to the relevant authorities, warning of the grave consequences and requesting the cancellation of such plans,” he said in an announcement on Wednesday.

On its part, the Hellenic Federation of Hoteliers said that any proposal or intention of imposing further charges to the country’s tourist product, particularly by increasing the cost for foreign or Greek travelers, is unrealistic and directly undermines Greek tourism’s competitiveness, which has already been hit by the doubling of the VAT charge for enterprises.

The federation reminded that the market of private holiday rentals (unregistered private apartments) has been left “untouched” by the government as it continues to operate freely and not under a legal, institutional and fiscal framework.

The federation pointed out that the government could collect unpaid taxes from at least 12 million overnights spent in such “lodges”.

WTTC: ‘Don’t Close Borders in Response to Terrorism… Travel is Force for Good in the World’