BBC Travel Offers the Best of Athens in a Bite

BBC Travel’s new video web series RSVP Abroad featured Athens and its culinary delights in one of its launch episodes, which was broadcast this month on BBC World News and BBC Travel Online.

Hosted by Julie Bensman, the interactive programme focuses on one city in each episode, looking at local producers, markets, culinary traditions and trends. 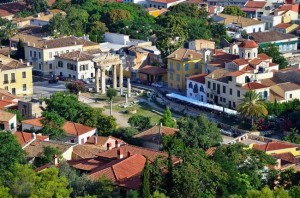 Bensman calls for social media suggestions and insider tips from locals in each city to assist her in throwing a cool, authentic dinner party that will showcase the local culture. She seeks ideas on choosing a venue and which dishes and drinks to serve, as well as tips on music, décor and which guests to invite.

In the case of Athens, she enlisted the help of a travel blogger to host the dinner, while she also spent time exploring the city’s tastes and traditions, from assisting a beekeeper to harvest honey to sampling tsipouro.

Bensman, who visited Athens with the support of Marketing Greece, also tried her hand at preparing a traditional Greek cake, together with a Greek food blogger and cook.

The Athens episode conveyed atmospheric images of the Greek capital including must-see classic highlights such as the Parthenon and sunset from Mt Lycabettus, but also the hip new face of the city as represented by the buzzing dining scene on Agia Irini Square.

Throughout the show, tips relayed by locals to Bensman via BBC Travel’s social media channels are featured.

“Athens alone produces nearly 600 tonnes of honey each year and Greece has more bee hives per acre than any other country in Europe,” she said as she assisted Yiannis Psarras, chairman of the Attica Beekeepers’ Association, to check on his bee hives on Mt Hymettus, which look over the Saronic Sea.

At the Centre for Hellenic Tradition in Plaka, with views of the Acropolis, she had a tsipouro tasting led by Yiannis Zafiropoulos, an expert from the tour company Athens Insiders.

“One of the good things to come out of Greece’s recent financial crisis is a renewed appreciation for traditional recipes,” Bensman said.

“The people, food and spirit of Athens are alive and well, and it looks like it will continue to be that way for years to come.”